Team JEGS geared up for a big weekend in Joliet 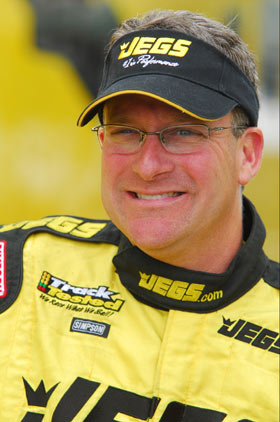 JOLIET, Ill. (June 27) – It isn’t an exaggeration to suggest that this will be the biggest weekend of the year for Team JEGS drivers Mike Coughlin and his nephew, Troy Coughlin Jr.

From the time they arrive at in town for the annual O’Reilly Auto Parts NHRA Route 66 Nationals, the Coughlin’s will maintain a busy schedule that includes both racing and numerous personal appearances.

Mike is one of 80 qualifiers for the annual JEGS Allstars competition, which will be held Saturday, and Troy Jr. will be racing his JEGS.com dragster in the Super Comp class at the regular national event. When they are not strapped into the seat of their race cars, Mike and Troy Jr. both plan to be very active participants in the JEGS Allstars festivities.

“I look forward to this event ever year and that’s certainly true this year because I will be racing in it,” Mike said. “The JEGS Allstars is a very big deal for everyone at JEGS. It’s one of many ways we show our support for the sportsman racers who help support us. Plus, it’s a really fun time for everyone involved.”

As usual, Mike plans to be a gracious host for the racers who have traveled from all over the United States for the JEGS Allstars race, particularly during Saturday evening’s post-race awards banquet. However, his hospitality only goes so far. When he’s behind the wheel of his 200-mph Chevy Cobalt Top Sportsman car, Mike will be looking to win the race, and help his North Central Division teammates claim their first overall team title since 2009.

“I’ve qualified for the JEGS Allstars twice before in 1990 and 1997 in Super Comp, and was a runner-up both times,” Mike said. “This year, I’d like to go just one round further and get the win. I want to be a good host but I also want the Division 3 (North Central) team to do well. Come Saturday night, we’d love to be holding up that big JEGS Allstars trophy and splitting up the $20,000 bonus. That would be the perfect way to cap off the weekend.”

Two weeks ago, Mike drove to a semifinal finish at the Lucas Oil Series event at Route 66 Raceway and was so confident in the performance of his Jerry Bickel-built Chevy that he left it virtually untouched.

“Other than our normal maintenance and a new set of tires, because it was time for them, we haven’t touched anything,” Mike said. “It has been very fast and very consistent and anytime I’ve lost a round it has a result of either the driver or the race track. I don’t think the car has let me down at all.

“We are as prepared as we can be and I’m looking forward to a great weekend. I want to watch my brother [Jeg Jr.] race in Pro Stock and Stock and my nephew T.J. [Troy Jr.] race in Super Comp. It’s going to be busy, but I’m happy about that.”

Coming off a solid showing in last weekend’s Ultimate 64 E.T. bracket event in Clay City, Ky., Troy Jr. is returning to the Super Comp class in his JEGS.com dragster. While the third-generation pro is hoping to claim his third-career NHRA national event title, he’s also going to be keeping an eye on the JEGS Allstar race.

“I love the JEGS Allstars,” Troy Jr. said. “Every year I’m in awe of how much talent there is in that race. There are 80 drivers from all over the country and every one of them is tough. They all had to earn their spot on the team and there are no easy runs on race day. I want to try and meet as many of them as I can. Hopefully, I can qualify for the JEGS Allstars team myself one day. It’s an elite group and I’d love to be a part of it. That’s a big goal of mine.”