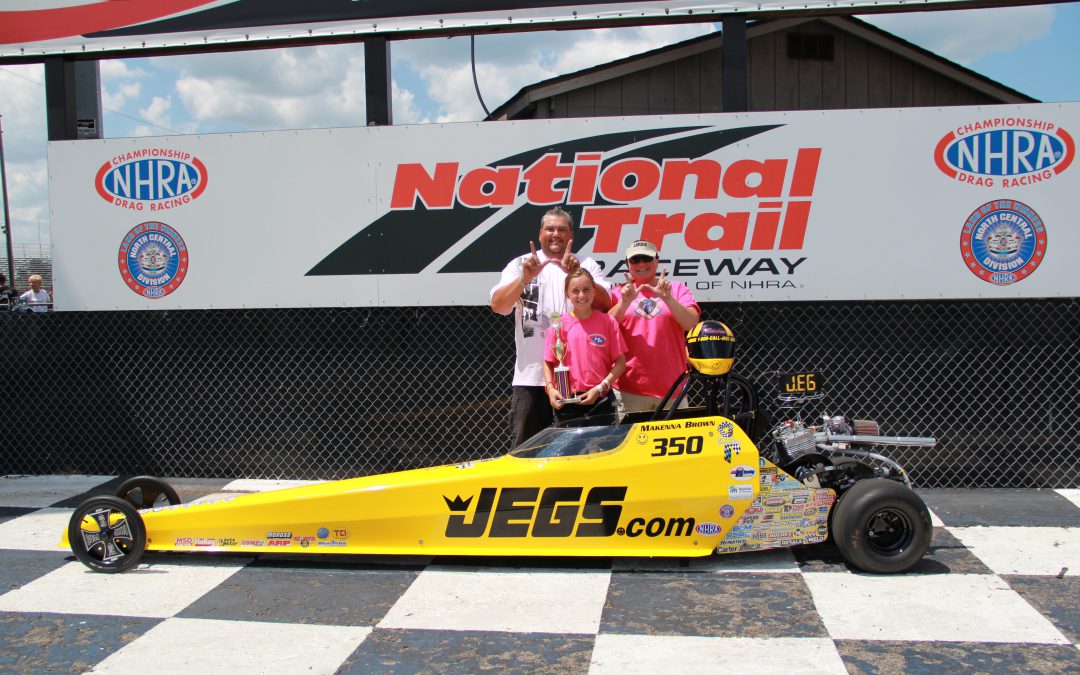 HEBRON, Ohio (July 31) – Despite running on a little sleep and with a new power plant and clutch package, Team JEGS racer Makenna Brown pulled out a Junior Dragster II victory on Sunday at National Trail Raceway.

Brown got back from the Junior Dragster Eastern Conference Finals in Bristol, Tenn., late the night before, but was ready to jump back in the car an win Sunday's race and more importantly a wager with her father, Cleve Brown.

"My dad and I have had this bet for a while now," Makenna said. "We bet that when I got back in the winner's circle, he'd have to gel his hair up in a fauxhawk and wear a pink shirt in our winner's photos."

After four solid runs with a new engine and clutch from Huddleston Performance in her Team JEGS car on Sunday, Makenna had the trophy and Cleve was off for a hair and wardrobe change.

"We made some changes in the car at Bristol that really helped us," Makenna said. "We had a good time in Bristol, but coming back home and racing for a win was the best way to end a fun weeks of racing."

In the final against Preston Tanner with both cars on an 8.96 second dial-in, Brown got off the line first with a .085 second reaction time to Tanner's .112. Tanner pushed too hard to make up the difference and ended up breaking out with an 8.95 second ET. Brown did exactly what she needed to do and crossed the finish line with a near-perfect 9.00 ET.

Makenna was on her lights all day, leaving first in three of the four races she ran on Sunday. In Round 1, she beat Jacob Oiler when she left first and pressured him into a breakout. In Round 2, Makenna hit another 9.00 on an 8.96 dial to beat Destiny Taylor who left second and had a 9.59 on a 9.56 dial. Round 3 was the only race where Makenna wasn't first off the line, but she hit her 8.96 second dial on the nose and opponent Matt Ruzicka went 10.50 on a 10.47 dial.

"The car was super, the best it has been all year," Makenna said. "I can't wait to get back out on the track again, but I'll need to come up with another bet to make with dad first."