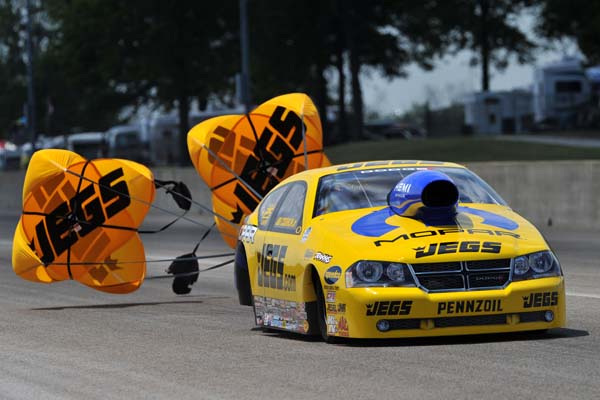 In 2012, Jeg Coughlin Jr. is making his return to the NHRA Full Throttle Drag Racing Series after a one-year hiatus. Jeg is driving the all-new JEGS Mopar Dodge Avenger in the Pro Stock class. In his first outing since his return, he drove to a runner-up finish at the O’Reilly Auto Parts Winternationals.

After the first 12 rounds, Jeg Coughlin Jr. is ranked 11th in the NHRA Full Throttle points standings but he is just four points out of the top ten.

Jeg Jr won back-to-back Pro Stock titles at Bandimere Speedway in 1998 and 1999, driving to a final round victory over Warren Johnson in 1998 and his brother, Troy Coughlin, in 1999. In his last appearance at Bandimere Speedway, Jeg Jr was a runner-up to Allen Johnson. Jeg Jr was also a runner-up at the 2003 Denver race, losing to Warren Johnson in the final.

In 12 career appearances in Denver Jeg Jr has a round win record of 20-10 in Pro Stock competition.

In 2010, his most recent season in Pro Stock competition, Jeg Coughlin Jr. won four Pro Stock races in seven final round appearances. He also claimed a win in the Top Dragster class at the St. Louis event.

Jeg Jr’s average qualifying position in Denver is No. 8. His best qualifying efforts came in 1999 and 2010 when he was No. 2. Jeg Jr has qualified in the top half of the field in seven of his 12 appearances in Denver.

Including Bandimere Speedway, Jeg Coughlin Jr. has won at least one NHRA national event at 22 different facilities. The only current venues on the NHRA Full Throttle tour where he has not won are the track in Norwalk and Charlotte.

During his hiatus from Pro Stock racing in 2011, Jeg Jr returned to his roots and spent much of the year racing in various sportsman classes. He enjoyed tremendous success, winning the Super Comp title at the JEGS NHRA Pacific SPORTSnationals in Fontana, Calif., and numerous major E.T. bracket racing titles.

In 295 career Pro Stock races, Jeg Jr has reached the final round 85 times, recording 52 wins. Including his 16 sportsman victories, Jeg Jr has won a total of 68 times, good for tenth place on NHRA’s all-time wins list. During his career, Jeg Jr has appeared in 107 final rounds, 85 as a professional and 22 as a sportsman racer.

Jeg Jr is one of only two drivers, along with Peter Biondo, to win national event titles in six different categories. He has won in Pro Stock, Comp, Super Stock, Super Comp, Super Gas, and Top Dragster.

Jeg Jr will once again be pulling double duty in Denver as he continues to the wheel his Dodge Challenger Drag Pak entry in Stock Eliminator. Earlier this year, family friend Jeff Taylor drove the car to a Lucas Oil Series victory.

4 – Final round appearances in Pro Stock for Jeg Coughlin Jr. at Bandimere Speedway