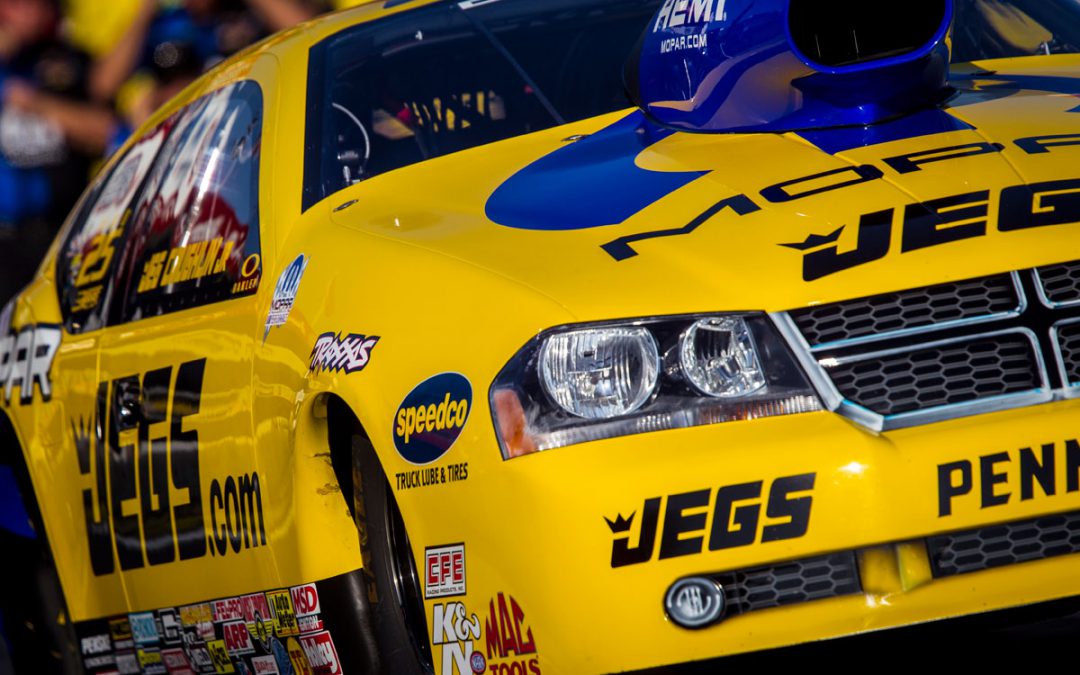 Jeg Coughlin Jr. will once again pursue the NHRA Mello Yello Drag Racing Series Pro Stock championship in 2013. Jeg Jr. is driving the same JEGS.com / Mopar Dodge Avenger that carried him a ninth-place finish last season. It was the 13th time in his career that Jeg Jr. has finished in the top ten.

The JEGS Mail Order team made a major change to their Pro Stock program this winter when Jeg Jr. joined forces with reigning NHRA Pro Stock champion Allen Johnson. This year, Coughlin’s Dodge will be powered by engines from Johnson’s J&J Racing team and will be tuned by Johnson’s crew chiefs Mark Ingersoll and Jim Yates.

Jeg Coughlin Jr. enters this weekend’s NHRA Mello Yello Drag Racing Series event as the second-ranked driver in Pro Stock after reaching the final round in two of the first three events of the season. Jeg Jr. is currently just 16-points behind leader Mike Edwards.

Jeg Jr. is the defending event champion of the spring Las Vegas race, having driven his JEGS.com dragster to the Super Comp title at the 2012 event.

On Saturday, Jeg Jr. will be one of the eight Pro Stock drivers racing in the K&N Horsepower Challenge, a special event that pays $50,000 to the champion. For the second-consecutive year, Jeg Jr. received an invitation to the event as the No. 8 seed after winning the special fan vote contest.

Jeg Jr. is a three-time winner of the Pro Stock specialty race that is now known as the K&N Horsepower Challenge. He previously earned titles in 1999, 2000, and 2009.

This will be Jeg Jr’s 11th appearance in the K&N Horsepower Challenge since his first full Pro Stock season in 1998.

During his career, Jeg Jr. has won the Pro Stock title five times in Las Vegas. He claimed a win at the inaugural event in 2000 by beating Warren Johnson and returned in 2001 and 2002 to post final round wins over Jim Yates and Warren Johnson, respectively. Jeg Jr. also won back-to-back titles in 2008 and 2009, beating Greg Stanfield in both final rounds

In addition to his five Pro Stock wins in Las Vegas, Jeg Jr. has also posted a pair of runner-up finishes at both the spring and fall events in 2001. In both finals, he lost to Greg Anderson.

In 309 career Pro Stock races, Jeg Jr. has reached the final round 87 times, recording 52 wins. Including his 16 sportsman victories, Jeg Jr. has won a total of 68 times, good for tenth place on NHRA’s all-time wins list. During his career, Jeg Jr. has appeared in 109 final rounds, 87 as a professional and 22 as a sportsman racer.

Jeg Jr‘s best elapsed time in a Pro Stock car is 6.487-seconds and his best speed is 213.23-mph both recorded at the most recent NHRA event, the Amalie Gatornationals in Gainesville, Fla.

In 22 appearances at The Strip at Las Vegas Motor Speedway (including the Spring event held in April), Jeg Jr. has a round win record of 38-15 in Pro Stock competition.

During his Pro Stock career, Jeg Jr. has competed in 309 events and recorded 492 round wins while incurring just 241 losses. He has failed to qualify just 16 times.

Of his 492 round wins, 84 have come via a starting line holeshot, which is the most of any past or current Pro Stock driver.

Jeg Jr is one of only two drivers, along with Peter Biondo, to win national event titles in six different categories. He has won in Pro Stock, Comp, Super Stock, Super Comp, Super Gas, and Top Dragster.

17 – Number of times Jeg Jr. has qualified No. 1 during his Pro Stock career.