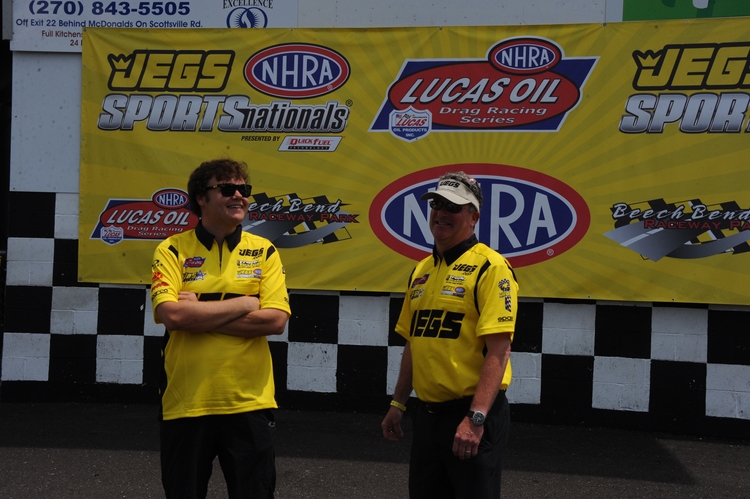 JOLIET, Ill. (June 1) — Team JEGS sportsman stars Mike Coughlin and Troy Coughlin Jr. are headed to Route 66 Raceway for this weekend's Burndown at Sundown with winning on their minds. Both men are past Division 3 champions and are right at home in Chicago, the site of the third D3 Lucas Oil Drag Racing Series event of the season.

"It's June so we are getting into the summer months, which only puts a bigger premium on all these races, especially the ones in our division," Troy Jr. said. "The first two D3 races were big for me, at least in my JEGS.com Super Comp dragster. I went to the final round in one race and the semifinals in the other so we've already put some good points in the bank. But you can give them back in a hurry too if you let your guard down so we need to be prepared for this weekend."

Troy Jr. will be competing in both Super Comp, where he's ranked fourth overall with just two races on his ledger, and Super Gas. Troy Jr. won the Division 3 Super Gas championship in 2013.

"Both cars are running great," Troy Jr. said. "We've just had some tough luck in Super Gas so far, but that can change fast. On the other side of the coin, we've been very fortunate with the dragster so things have a way of balancing out.

"Uncle Mike and I have the best guys in the business helping us and we have a lot of fun together, all of us. I know he's as appreciative as I am with the efforts of Justin Beaver, Tony Collier, Greg Cody, Dave Raurk and Rick Rossiter. They give us great racecars every weekend, without fail."

Mike, the Division 3 Top Sportsman champion in 2007 and 2009, made the switch to Top Dragster this year and has yet to show the full potential of his extremely quick new rail. He's hoping the good vibes of Route 66, where he's won three times in the past, in 2005, 2007 and 2011, will be the elixir he needs to get things rolling.

"We've changed a few things up for this weekend that we think will help but for the most part we're already really happy with this dragster," Mike said. "It's so fast. I love driving it. We are very close to making it as consistent as we need it to be to turn on multiple win lights on race day.

"Fuel injection isn't new to us but the supercharger is and as much as this thing likes boost, you have to find that perfect spot where everything is happy. When you make your own air you have to keep an eye on things, especially if conditions deteriorate like we get in the hot summer months. We are having a blast, though, for sure."