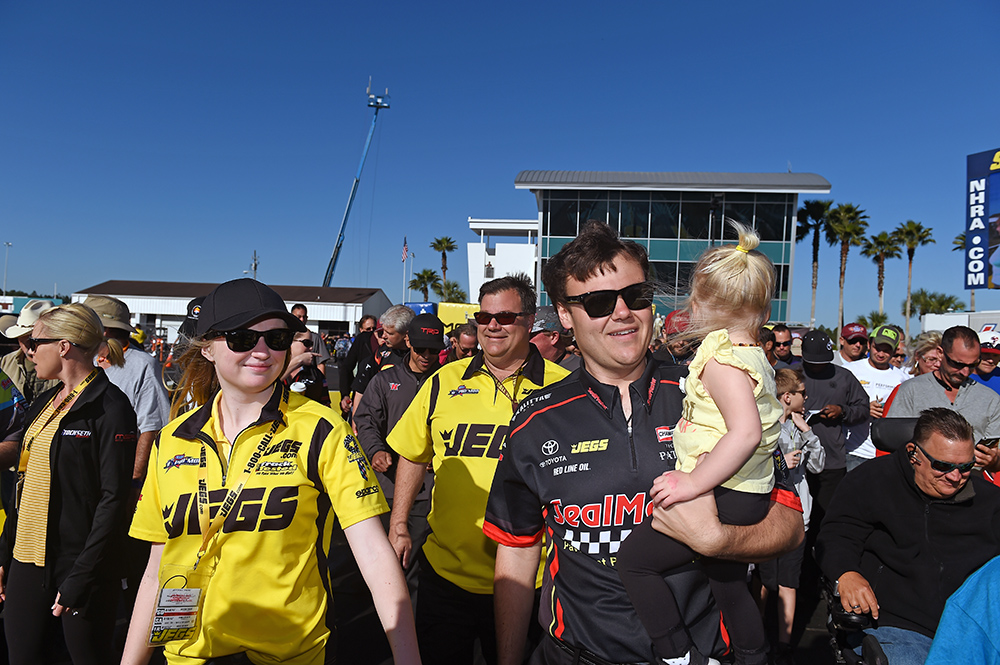 CHARLOTTE, NC. (April 13, 2017) – Kalitta Motorsports and Troy Coughlin Jr., driver of the SealMaster Top Fuel dragster, are pleased to welcome NASCAR Camping World Truck Series (NCWTS) and ThorSport Racing drivers Grant Enfinger and Ben Rhodes to the NHRA 4-Wide Nationals. The drivers will join Coughlin Jr. in participating in the SealMaster Track Walk prior to the beginning of the NHRA race action.

SealMaster, the most trusted name in pavement maintenance for more than 40 years, is a sister company with ThorSport Racing. SealMaster has been a valued partner with Kalitta Motorsports for many seasons and has served as a full-season primary sponsor for the past two years. This year, they support Auto Club Road to the Future contender Coughlin Jr. in his rookie nitro season.

“It is awesome to see great drivers from other forms of motorsports come and check out drag racing,” said Coughlin Jr., who is currently eighth in the point standings. “SealMaster is such an important part of my team, and the sport as a whole with their backing of the Track Walk. It is means a lot that these guys take out time in their schedule to come to zMax!”

ThorSport Racing is the longest-tenured NASCAR Camping World Truck Series team with over 900 starts. Rhodes is a former K&N Pro Series East Champion and Rookie of the Year, who is in his second full-time Truck Series-season with ThorSport Racing. The Louisville, KY native is currently sixth in the point standings after three starts this season. 2017 Sunoco Rookie of the Year contender, Grant Enfinger, is already a winner at the Truck Series level. The Alabama native won his first Truck Series race at Talladega (Ala.)Superspeedway in 2016 running a limited schedule. Enfinger is currently eighth in the series standings following the first three events of the season.