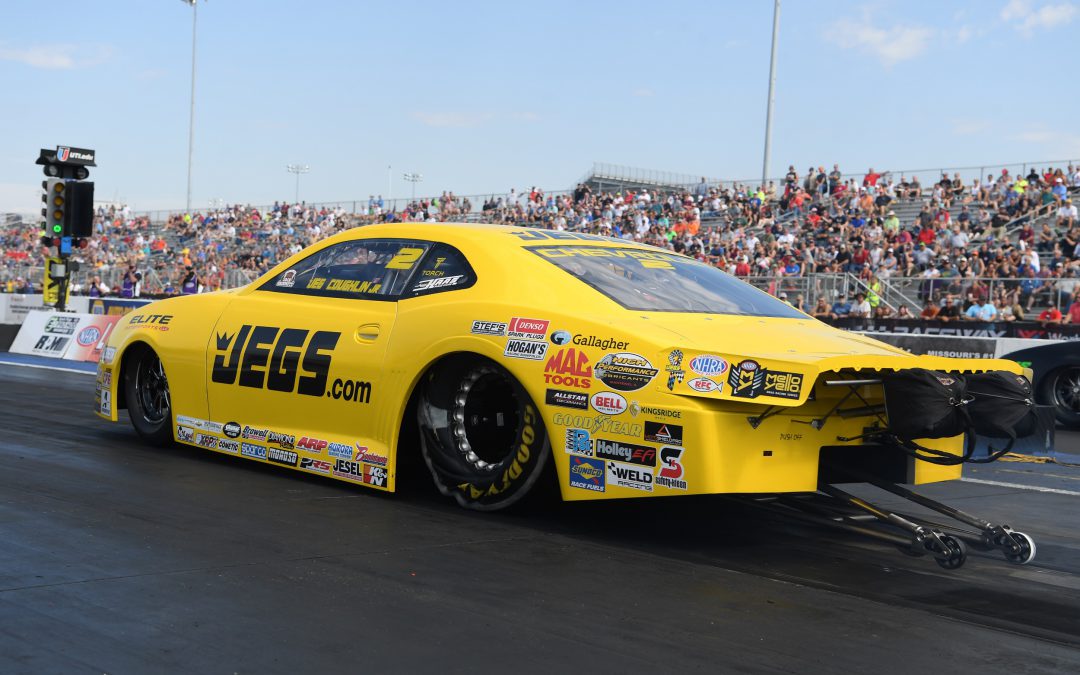 CONCORD, N.C. (Oct. 8) — Heading into this weekend's 12th annual NTK NHRA Carolina Nationals at zMAX Dragway, five-time Pro Stock world champion Jeg Coughlin Jr. says this year's Countdown to the Championship playoff has been so tough that winning races is about the only way a driver can advance.

Coughlin, who jumped from eighth to sixth thanks to a strong semifinal finish in the first of six playoff races in Reading, Pa., was able to maintain that position in Race 2 at St. Louis despite an unlucky quarterfinal exit. But after collecting six overall world titles and 81 national event wins, a sixth-place ranking isn't what excites the future Hall of Famer. He wants trophies.

"You just about have to win races to climb the ladder at this point," Coughlin said. "Fortunately, the JEGS.com Elite Motorsports Chevrolet Camaro is extremely capable of doing just that. This will be our third race with new configuration and it's been working well for us. We just haven't served ourselves a whole lot of good luck so far."

Since the switch to a new combination prior to the start of the playoffs, Coughlin and crew have been in the top tier of the class in regards to performance. They qualified fifth in Reading and second in St. Louis and have been gobbling up bonus points during qualifying for finishing each round in the top three. If not for a rare red-light start in Pennsylvania and a miniscule holeshot loss in St. Louis, things could be very different.

"We missed a big opportunity in St. Louis but that's old news at this point," Coughlin said. "You can't change the past but you can affect the future and we have four big races left that are all very important.

"The reason we're optimistic is we have proven we can run at the top of the charts these last two races. We'll be ready for Charlotte and we'll be ready to win. It's been a few years since we won at zMAX (2013) but it has been a favorite of mine since they opened the doors 12 years ago."

Aside from his own racing activities, Coughlin will be supporting his brother Mike Coughlin and nephew Troy Coughlin Jr. at zMAX. Currently ahead by just 10 points, Mike is in a ferocious fight for the Division 3 Top Dragster championship and is hoping for a big weekend in Charlotte to maintain his top perch. Troy Jr., meanwhile, just captured his second straight regional championship in Top Alcohol Dragster and is now in a pitted battle for the national crown.

"I get so much joy out of seeing my family members do well, even more so than when I win," Jeg Jr. said. "There's something about seeing the look on everyone's faces and being in the middle of their celebrations that's so special.

"Mikey has been doing so well this year, winning races and leading the points most of the way. He needs to close that deal out. And Troy Jr., wow, what a juggernaut his McPhillips Racing team has been, really for two straight years now. I will not miss a minute of their racing. Charlotte is going to be a lot of fun. We're excited."