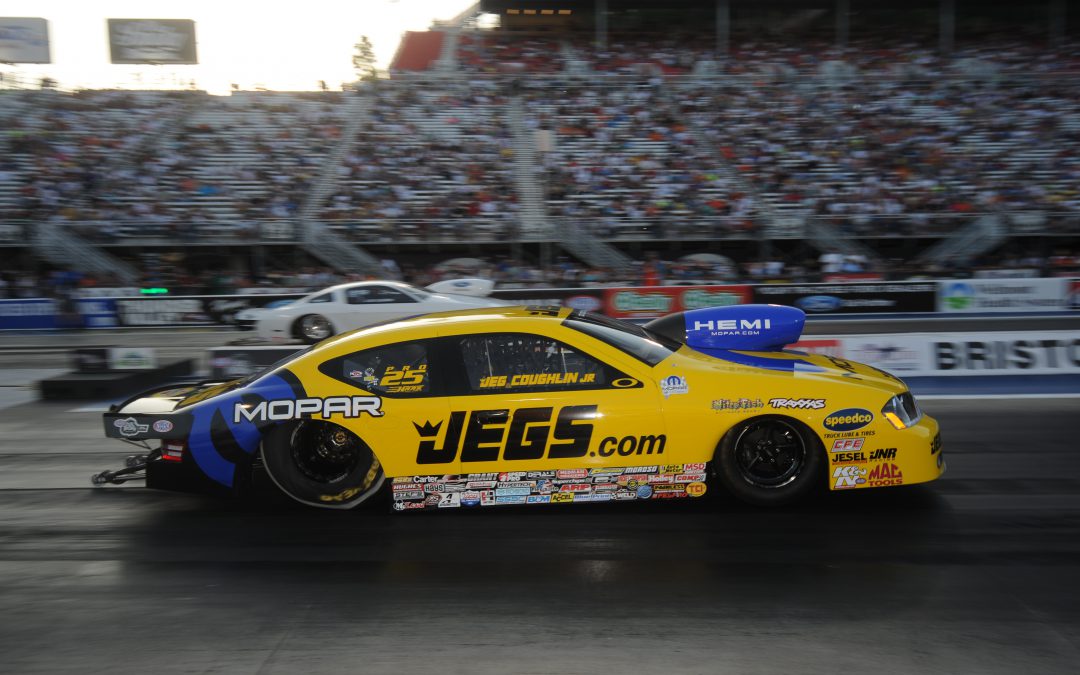 POMONA, Calif. (Nov. 7) — It surprised many when Jr. returned from a year's sabbatical and promptly raced his brand-new JEGS.com/Mopar Dodge Avenger to a runner-up finish at the season-opening race in Pomona earlier this year. Not only had Coughlin been away from the professional ranks for a year, but he'd elected to start a new racing program from the ground-up.

"It's been a wild ride this year, starting right here in with that runner-up finish," Coughlin said as he prepared for this weekend's season finale. "We certainly had high hopes for 2012 and the start we had really got the blood pumping.

"For a new team, I think we did well. We're not fighting for the championship this time through, which is a bit of a disappointment, but to make the Countdown field and have a respectable finish in the points in our first year is pretty darn good."

About the only people not surprised with Coughlin's strong start, aside from the veteran crewmen in JEGS uniforms, were the drag racing historians, who know Coughlin is one of the most prolific drag racers in track history.

"My love affair with the Fairgrounds started back in 1992 when I clinched the Super Gas championship," Coughlin said. "Back then they used to parade the Sportsman champs down the return road at and the response we got from the fans really made a mark on my heart. They appreciated what we had accomplished and were knowledgeable enough to know what it took to get it done. I've been hooked on ever since. It's been 20 years but I still feel the exact same way.

"It's an electric atmosphere at both races. The Winternationals are fun because the year is so full of promise and everyone is dreaming big. All the new teams are there with new cars and new paint jobs. Then you get to the Finals and the battles for the various championships are at their peak. It's never boring at ."

Coughlin will actually have two chances to visit 's victory circle this time through as in addition to his Pro Stock endeavors, he'll be competing in his JEGS.com Super Comp dragster. Last year, Coughlin drove the rail to a win in nearby , becoming the first drag racer in history with victories in six different eliminator categories — Pro Stock, Competition Eliminator, Top Dragster, Super Gas, Super Stock and Super Comp.

"We've had some success with the dragster and I'm looking forward to running it again this weekend," Coughlin said. "Super Comp is always a tough category but we'll give it all we got and see what happens."

Sportsman qualifying starts at 8:15 a.m., Thursday. The first round of Pro Stock qualifying begins at 1 p.m., Thursday, and continues with a second round at 1 p.m., Friday, and two more sessions at 11 a.m. and 2 p.m., Saturday. Eliminations start at noon, Sunday, with ESPN2 carrying all of the action.