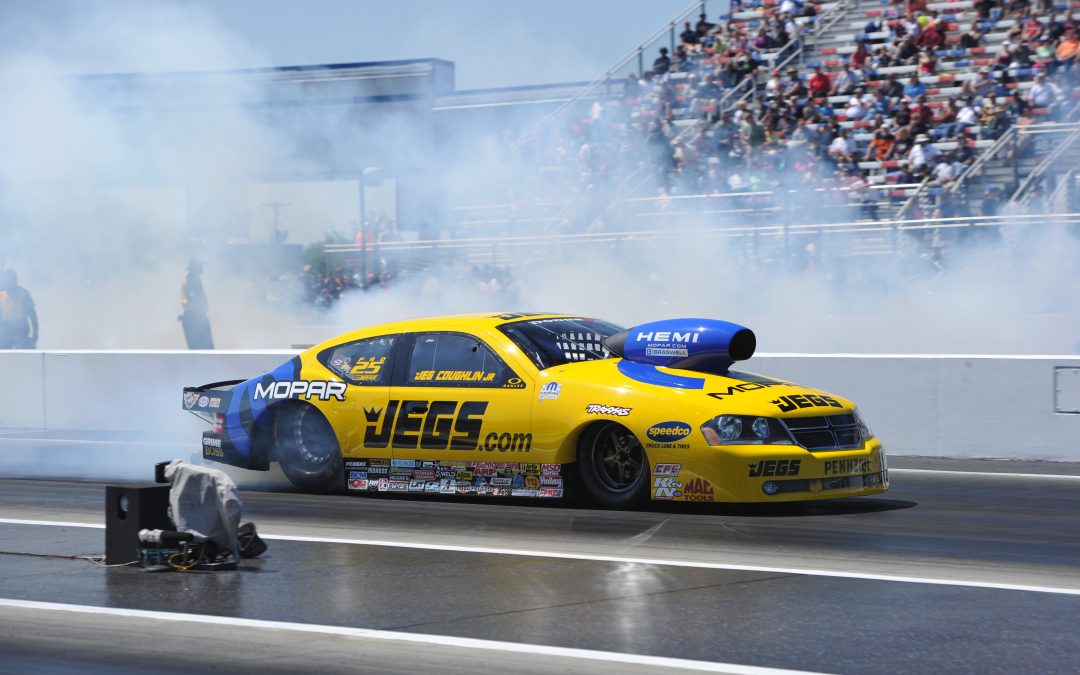 CHARLOTTE (April 21) — Jeg Coughlin Jr.'s quest to win a drag race under the unique 4-wide format used at this weekend's Dollar General NHRA Nationals will have to wait another year as the five-time world champion came up a couple rounds short Sunday at zMax Dragway.

As usual, Coughlin crushed the Christmas Tree in his race against Jason Line, Rodger Brogdon and Lewis Worden, recording an almost perfect .005-second reaction time. But as the JEGS.com/Mopar Dodge Avenger led the way down the track it suddenly became very loose, forcing him to do some fancy driving just to avoid crashing. Ultimately, the maneuvering cost him a chance to advance as his 6.722-second pass at 211.66 mph ended up being fourth quickest of his quad.

"It was definitely our race to lose today and unfortunately we did," Coughlin said. "We just didn't make the right calls in the pits. Obviously the horsepower is fantastic and I felt really, really good behind the wheel. I let the clutch out on time and made it about a car length before it took the tire off and I was sideways. I grabbed second and third gear all in about a second's time to try to get it to settle down but by that point I saw cars pulling away on both sides of me, which is not what you want to see from the seat.

"We'll lick our wounds and move on. That's really all you can do at this point. We have a great car, great people and great motors, we just didn’t hit the set-up today. With my reaction time I only needed a 6.59 to advance. It didn't happen for us this time."

Coughlin will have little time to contemplate his 4-Wide fate as the circuit quickly turns to Royal Purple Raceway for the sixth race of the NHRA season, which runs Friday through Sunday in the Houston suburb of Baytown, Texas.

"I'm really not thinking like we need to rebound from anything," Coughlin said. "It's more like, darn it, we missed out on a great opportunity here. The 4-wide is a little different deal, a little trickier with staging and all, but I was totally prepared and we had a great chance, we just didn't get to showcase our best effort.

"We'll see what Mother Nature deals us in Houston. That track can be very good and both Allen (Johnson, teammate) and I have had great success at that facility so we'll arrive in Texas with a lot of confidence."