Third-Place Run at Springport Inches Coughlin Closer to a Championship 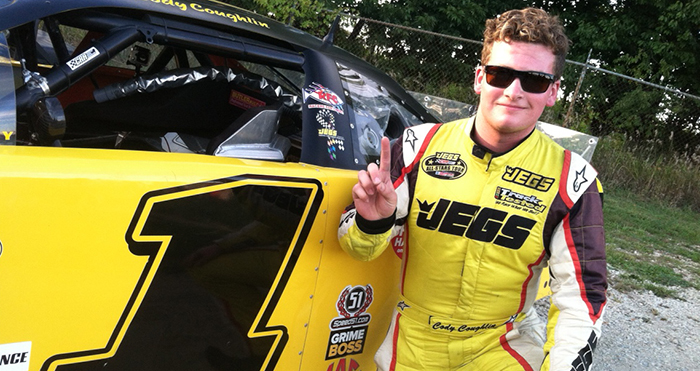 Coming into this weekend, Cody Coughlin and his Team JEGS team felt it was time to show their muscle with three races remaining in the 2013 JEGS/CRA All-Stars Tour schedule. They showed how strong they were as a team with a great performance at Springport Motor Speedway in Springport, Michigan this past Saturday night.

Coughlin was confident coming into this event and that confidence showed behind the wheel, as he was the evening’s fast qualifier and led the most laps in the 100-lap event.  The team is showing they are hitting their stride to make that last dash to the championship finish line.

The JEGS Chevrolet was fast all day long from practice to qualifying. When the green flag dropped, Coughlin started eighth and was up to fifth after one lap. By lap six, he was up to the third position. On lap 23, Coughlin put the No. 1 car at the top of the leaderboard until lap 83 when two local competitors were able to get by Coughlin on a late restart.

The third place finish capped off a solid night as Team JEGS extended its point lead in the chase for the JEGS/CRA All-Stars Tour championship.

“I think we learned what we needed to do get our flat-track program better,” Coughlin said after the race. “We finished third and led a lot of laps and that is great. We probably led the most laps and we have a bigger point lead now. We are getting closer and closer to locking this up.”

There are two events remaining on the JEGS/CRA All-Stars Tour schedule. Coughlin and his team will head to Lucas Oil Raceway in Clermont, Indiana this weekend. The season finale will be on October 11 at Winchester Speedway in Winchester, Indiana.

Coughlin feels that the momentum will help the No. 1 team produce a solid run at the well-known half-mile oval located west of Indianapolis. Last year, Coughlin finished sixth in the fall event at Lucas Oil Raceway.

“When we went to Lucas Oil Raceway in July, we were missing just a little bit of everything in every aspect of the car,” Coughlin recalled. “After that, we went through it and threw the kitchen sink at it and it worked. We finished second at Auto City and at Winchester. We are ready to go back and have a better run.”

“The team, as a whole, is gelling very well right now and we are getting closer and closer to that ultimate goal,” Coughlin said. “I can’t thank them all enough for their hard work this season. We are going to focus on having solid finishes at LOR and Winchester so we, as a team, can hoist the trophy together at the end.”

On top of the great day on the track, Coughlin also enjoyed the fan experience at each JEGS/CRA All-Stars Tour event, which includes a pre-race autograph session.

“It is so cool to see the fans come out and support short track racing. I think we provide some of the best live action at an affordable family price,” Coughlin said. “I really appreciate their compliments when they come to get an autograph and other items we have for them at the events. Thanks for coming out to support us.”

Coughlin also thanks his parents John & Di and his sister Kennedi for their love and support towards the team goal this season.

“God has really blessed everyone within the JEGS family this past weekend,” Coughlin said. “We had a great weekend on the oval track and drag racing side. This is a great year for Team JEGS Racing.”