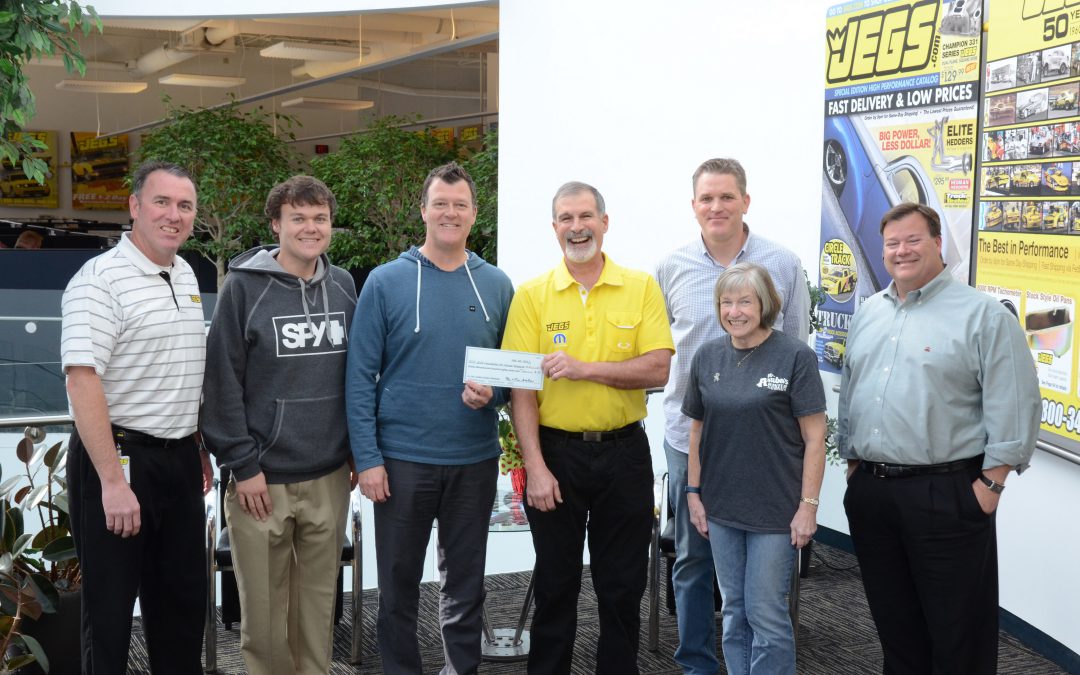 DELAWARE, Ohio (May 4) — The recently-completed 13th annual Mr. Aruba's Winter Nationals Bench Race and Charity Challenge raised nearly $15,000 for the JEGS Foundation for Cancer Research. This year's record-breaking total boosted the amount of monies donated to the JEGS Foundation since the inception of the race to just shy of $75,000!

"It’s great what Mike DeChicco and Jane Graebner — or Mr. and Mrs. Aruba, if you like — have been able to establish and build upon through the years," said Jeg Coughlin Jr., vice president and co-owner of JEGS, which started the JEGS Foundation in 2003. "What they've done has really made a difference in cancer research, both at Ohio State University and Nationwide Children’s Hospital.

"I’ve enjoyed coming to a handful of the events myself over the last four or five years. It’s a great group of people all there to socialize, have a good time, get on the practice tree and try to duke it out, and raise money for cancer research. There are a lot of win-win situations with what they have been able to establish and build on and we are proud to not only be recipients of their generosity but be a part of event itself."

DeChicco and Graebner started Mr. Aruba's Winter Nationals Bench Race and Charity Challenge in 2006 as a way to have a little fun during the cold Ohio winters. Held at "Ostrander International Raceway" – aka DeChicco's basement – in Ostrander, Ohio, the Winter Nationals features special races on a practice Christmas Tree. Family, friends and fans buy into the race, with the money going to the JEGS Foundation.

The Winter Nationals unofficially began in 2005 when DeChicco and some friends gathered for beverages around a practice Christmas Tree. A year later, after learning of a friend's battle with cancer, DeChicco and Graebner decided to use the party for a bigger purpose, and the fundraiser was born.

"Another great year and we couldn't be happier," DeChicco said. "This thing just keeps getting better every time. Thank you to all who participated, and especially to Jerry Vetters for hooking us up with Dave Chilcote of Gabbys, who donated the delicious strombolis. Also to John Josia for the authentic Greek baklava, and Samantha Coughlin for the Splenda chocolate chip cookies."

After numerous perfect lights, each worth some great JEGS apparel, the Gambler’s Race was won by Jeff Day of Precision Machine in Canton, Ohio, who edged Brian Spring for the top prize. Both men immediately kicked back a large portion of their winnings to the JEGS Foundation. Semifinalists included Lonnie Smith and Michael Beard, who each pocketed $50 JEGS gift cards.