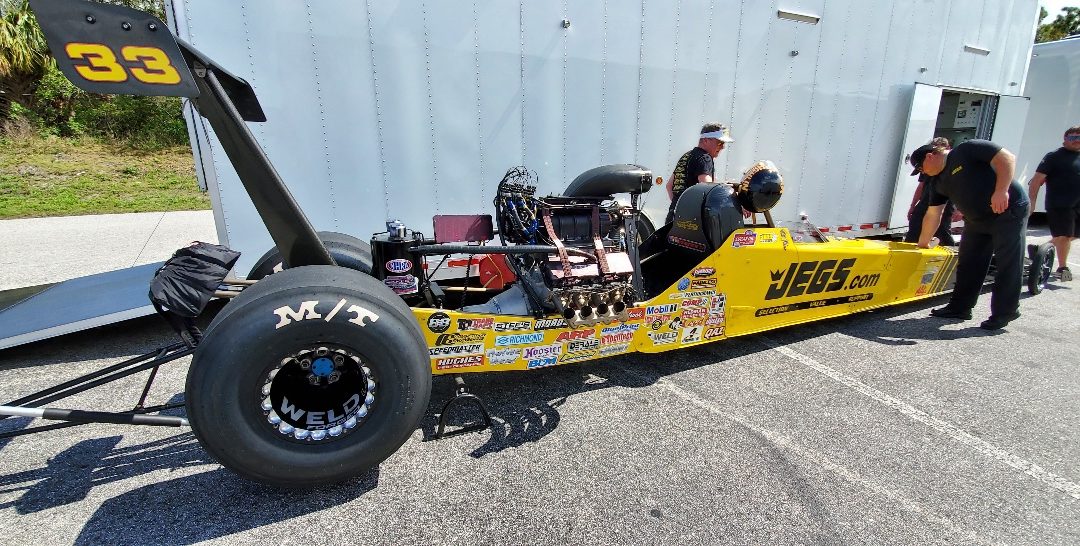 GAINESVILLE, Fla. (March 3) — Three-time Division 3 champion Mike Coughlin will bring his 38-years of drag racing experience to this weekend’s “Baby Gators” event at Gainesville Raceway with hopes of securing a 30th career victory. If not this week, then he’ll quickly get another chance at next weekend’s regular Gatornationals event.

Coughlin will be competing in Top Dragster, a class he dominated and won in 2019 in the North Central Division. He’ll be joined in the JEGS pit by the decorated duo of Jeff Taylor and Danny Nelson, who are helping the team shakedown two hot rods for Mike’s sons Clay and Jack.

“It’s a new year and a very exciting one for me as we prepare to add my boys to the team,” said Coughlin, who also captured D3 championships in Top Sportsman in 2007 and 2009. “They’re caught up in school at the moment, which gave us a great opportunity to break-in their cars with a couple of true pros in Jeff and Danny. I’m very appreciative of their help and it’ll be fun racing with them.

“We’re kind of in test mode and racing at the same time. There’s some new stuff on Jack’s dragster so the more runs we can put on it the better. Jeff’s already been making runs in Clay’s Cobalt and the guys are making sure it’s perfect. My dragster is pretty much the same with the exception of a new gear ratio we’re trying to gain more speed. There’s a lot of new stuff happening and we’re ready to see how it all works out.”

One of the most prolific Sportsman racers of all-time with three championships and 48 event titles, Taylor will pilot the B&B-built JEGS.com Chevy Cobalt he’s been testing recently by contesting the Super Stock category at the Gatornationals. The car is being prepped for Clay’s debut.

For his part, chassis-builder/racer Nelson will captain the JEGS.com Super Comp Dragster at the Baby Gators, and possibly the Gatornationals as well. The team has installed a new ComSync fuel-injection combination to feed the motor and asked Nelson to make some competitive passes before he hands the car off to Jack. Like Taylor, Nelson is a proven winner with one title and five victories to his credit.

As for Coughlin, who will be supported by longtime crewmen Greg Cody, Tony Collier and Justin Beaver, as well as EFI specialist Ryan Micke, getting a little extra sunshine on his face after a long, cold Ohio winter, makes an extended trip to Florida a double treat.

“I had given some thought to not racing myself so I could concentrate on helping Clay and Jack but we had a really good shot at making the JEGS Allstars team last year only to end up second because they took some races off the schedule,” Coughlin said. “This year’s Allstars team hasn’t been decided yet so we thought we’d give it our best effort.

“The plan is to get after it as hard as we can early on so we’re happy to be here for two races in a row at a track that’s one of my favorites. Plus, I really like the Top Dragster class, the people that race in it, the speed of the cars, and the driving aspect. It’s quite a challenge. And let’s face it, any time you can come to Florida it’s worth it.”

The Baby Gators will feature competition in 10 different classes. Racing roars to life at noon Thursday and continues through Sunday. NHRA.tv will live stream all the action.