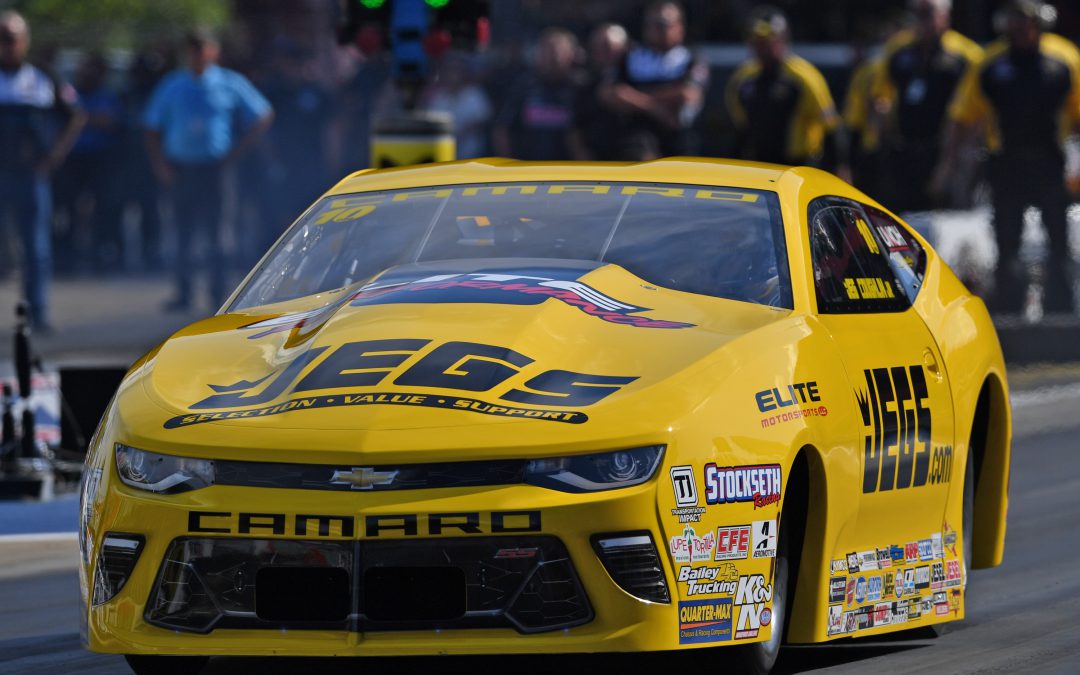 BRISTOL, Tenn. (June 18) — Jeg Coughlin Jr.'s hopes of converting his 23rd career No. 1 qualifying effort into a victory was foiled in the quarterfinal round when his JEGS.com/Elite Performance Chevrolet Camaro was plagued by severe tire shake in his race against part-time teammate Alex Laughlin Sunday at Bristol Dragway.

Coughlin had a marginal jump on Laughlin at the starting line but barely made it a foot before his huge rear Goodyear slicks started to square up. He really had no choice but to abort the run to avoid any catastrophe, as Laughlin sped away for an easy 6.769-second, 204.54-mph win.

"You know, we had a nearly 140 degree track up there and just honestly overpowered it a little bit," Coughlin said. "As soon as I swapped feet and let the clutch out it wanted to pick the rear end up and just spin and shake. At that time, I was trying very hard to get it into second and third to calm it down. I think I was in third gear by the time I passed the tree and by then I could see that Alex was motoring down through there and knew we were in trouble and just had to call it a day."

"Obviously, we came out with 13 cars in qualifying so I had a solo in the first round and had a decent run," Coughlin said. "We weren't real aggressive and we weren't too conservative; I just felt like we were kind of middle of the road trying to get the car down the track.

"It's really hot here today. I let the clutch out during my solo pass and the back end of the car kinda slid to the left and shot the car to the right but I was able to navigate down through the gears and run decent at 6.74.

"I felt that if history repeats itself then Mark (Ingersoll, crew chief) and the team would do a great job at re-tallying things and shifting things around to get it to clean up for its weaknesses. We truly thought we'd have something for Alex but just overdid it a tad."

Coughlin will be racing near home in just a few days when the NHRA tour makes a stop in Norwalk, Ohio, just 90 miles away from Coughlin's hometown of Delaware, Ohio. Norwalk qualifying begins Friday afternoon.

"It was great to be here in Bristol," Coughlin said. "We made it through some heat, got the top qualifier, and added another round win. Now we're looking forward to Norwalk in the coming week in our beloved Buckeye State. We'll be ready."