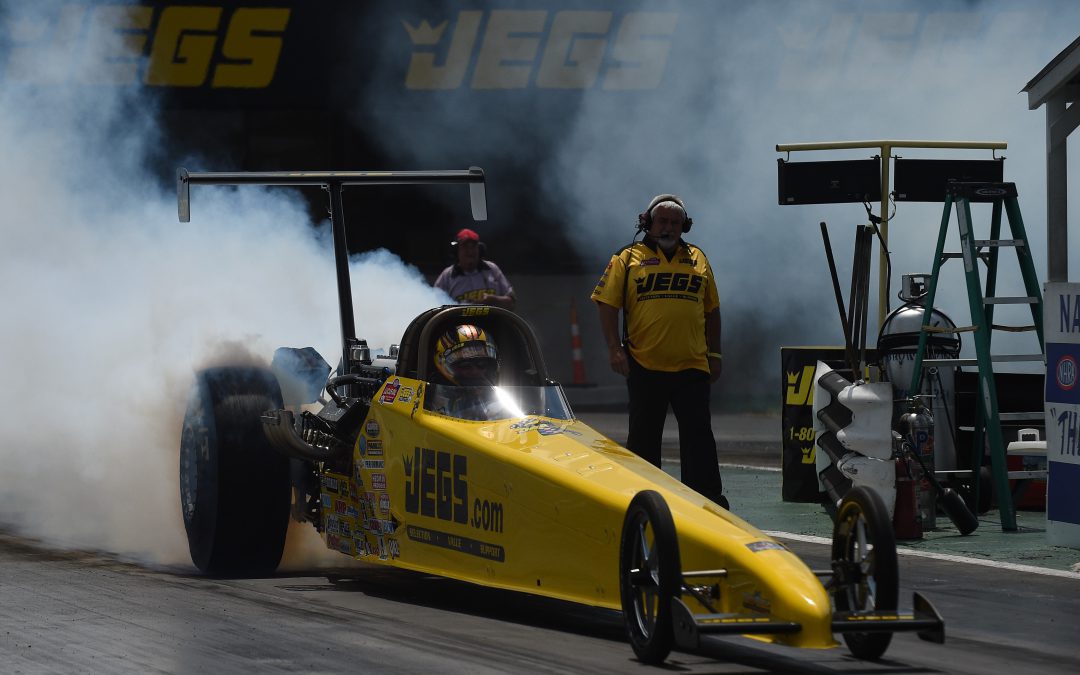 CONCORD, N.C. (Sept. 13) — A strong fourth-round showing last weekend in Englishtown, N.J., combined with two big victories on the season and a run of great finishes at other events, has lifted JEGS.com pro Mike Coughlin to fourth place in the national Top Dragster rankings heading into this weekend's 10th annual NHRA Carolina Nationals.

Coughlin started the year with a victory at the season-opening Winternationals in Pomona, Calif., and scored again one month ago at a Division 3 race in Indianapolis to bolster his credentials. Combined with other steady performances along the way, Coughlin has a chance to make up even more ground with two divisional races and two national events left on his schedule.

"The dragster continues to run so well," Coughlin said. "My guys — Greg Cody, Dave Raurk, Ryan Micke and Tony Collier — have us just 44 points out of first place nationally with four races left where we can gain points so we're really excited. We just need to go three rounds or more this weekend and we'll be adding points to our total so we're focused and excited to get to zMax Dragway."

By design, Coughlin will be racing alongside his brothers Jeg Coughlin Jr. and Troy Coughlin, who are fighting for championships themselves in Pro Stock and Pro Mod, respectively. Nephew Troy Coughlin Jr. also will be competing in Charlotte in the Super Comp category.

"Since I can somewhat pick and choose the events where I race, I've tried to line it up with the races where both Jeggy and Troy are racing because we always have so much fun together," Mike said. "We're happy Charlotte is one of those races because it's a beautiful facility that definitely lives up to its nickname of 'the Bellagio of drag strips.' Even my son Clay, whose coming with us this weekend, says Charlotte is one of his favorite tracks.

"We're planning on having some fun but we've got some serious racing to do as well. Our fate is in our hands to a large extent. We just need to execute. It appears both the national and Division 3 points races are going to end up being very, very close so we need to squeeze every point we can out of these last four races."

Currently, Mike is third in the D3 points. He's a two-time D3 champion in the Top Sportsman class.