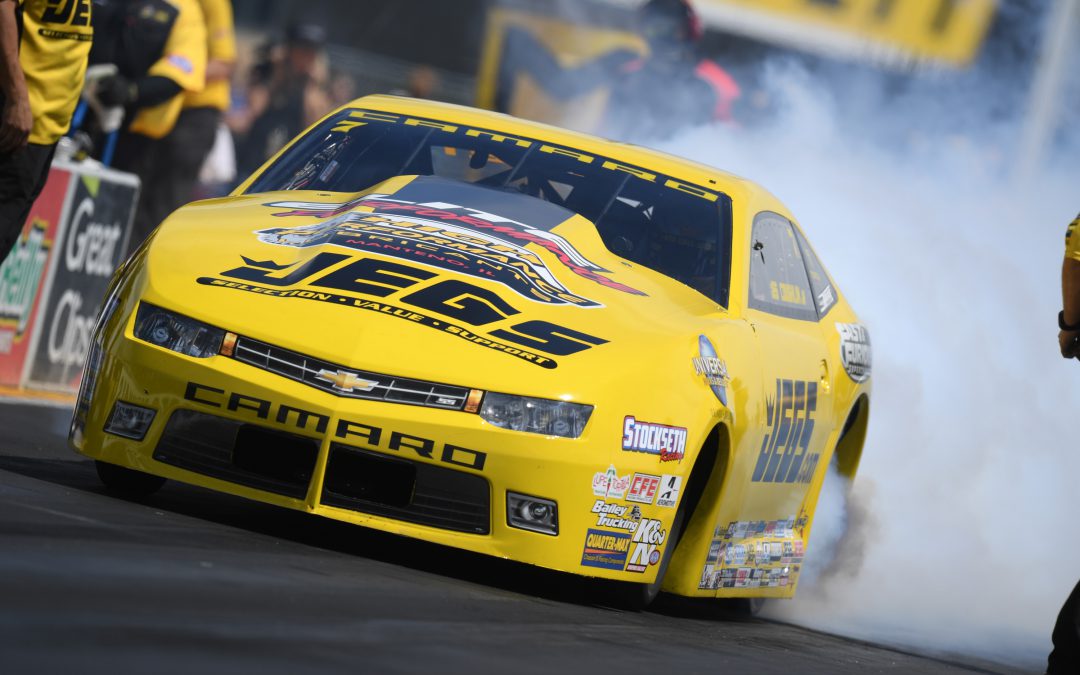 INDIANAPOLIS (Aug. 28) — The top drivers from the JEGS.com camp plan to paint Lucas Oil Raceway a familiar shade of yellow and black at this year's 64th annual Chevrolet Performance U.S. Nationals with dreams of winning the sport's top prize in five different eliminators.

"Not too many cars or teams have enjoyed the momentum we've built this summer here at Elite Motorsports," said Jeg Jr., a four-time national event winner this year. "It's been a good year and we're ripping and rearing to go this weekend.

"Most everyone knows this is the Super Bowl of drag racing. It's a race sponsors, team owners, drivers and crew personnel hold in very high regard so we place a lot of emphasis on this event. Plus, it's the last race of the regular season and it awards points and a half so we're all fighting for our playoff spot because the overall points will be reset come Monday night and the higher up you finish now, the better start you have for the Countdown."

"All these great features I've been reading on NHRA.com about Indy has me all excited," Jeg Jr. said. "It's going to be a great event and extra special with brother Troy continuing his back-from-retirement tour in Pro Mod, my nephew Troy Jr. coming into the weekend on a big winning streak, my father-in-law Al and brother-in-law Jason Kenny racing with us, and Luke Bogacki wheeling the JEGS.com Vette in Super Gas."

Back from a little time off, three-time Pro Mod series champion Troy Coughlin Sr. will be searching for his second U.S. Nationals trophy, this time in his JEGS.com twin-turbo Ford Mustang. Working once again with decorated crew chief Steve Petty, the reigning champion of the E3 Spark Plugs Pro Mod Drag Racing Series would love to have a break-through race this weekend.

"We've had a couple months since the last (Pro Mod) race and the guys have been working nonstop on the car," Troy Sr. said. "I drove it myself a few weeks back and it's definitely improved from where we started. They're still testing now, and I know once Steve gets done with it that thing will be a beast.

"We have some simple goals for Indy: Qualify in the top six and race to the semifinals at least so we can try our luck from there. If we can take out some of the big guys along the way, then we're living in a perfect world. No matter what, I'm excited to go to Indy. It's the coolest race there is and it brings out the best in everyone. We'll be ready."

Troy's son, Troy Coughlin Jr., arrives in town on a two-race winning streak in his JEGS.com McPhillips Racing Top Alcohol Dragster and will also contest Indy in the JEGS.com Super Comp Dragster. Troy Jr. has won Indy twice, once in Super Comp (2010) and once in Super Gas (2014).

Family friend Luke Bogacki will also represent JEGS.com in the team's Chevrolet Corvette roadster, vying for the Super Gas title. Bogacki triumphed in the Super Comp class at Indy in 2015.