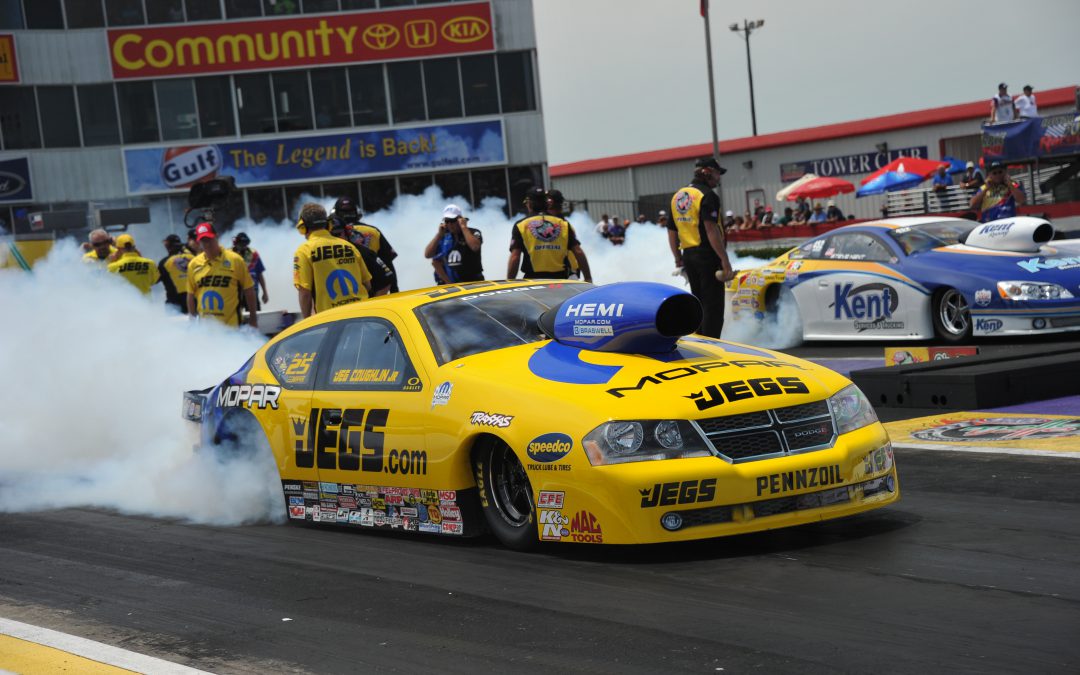 HOUSTON (April 28) — Past Pro Stock world champion Jeg Coughlin Jr. was hoping to convert his first No. 1 qualifying effort of the season into a victory Sunday at Royal Purple Raceway, but even though that goal wasn't reached, his strong semifinal finish did bring a smile to his face.

"Two more win lights would have made this weekend extra special but anytime you can get multiple round wins on race day, it's pretty hard to be upset," Coughlin said. "The JEGS.com/Mopar Dodge Avenger is running great and earning that No. 1 qualifier was a nice feather in our caps. It proves just how much horsepower Roy (Johnson, engine builder) is making."

Coughlin posted a strong 6.569 at 211.20 mph Friday night, which was good enough for the 18th low qualifier award of his illustrious career. Rain on Saturday washed out his final two attempts, so he entered race day with a first-round date with No. 16 qualifier Steve Kent of Louisiana.

"Steve's always a tough draw but this time he red-lighted so we got the win on the starting line," Coughlin said. "I still went through the run to try and preserve lane choice and we put a 6.572 at 211.79 mph up there, so we were very pleased.

Due to his quicker e.t. in the quarterfinals, Coughlin carried lane choice into his Round 3 race with two-time champion Jason Line. The two men left the starting line side-by-side but Coughlin's machine quickly got into some severe tire spin. By the time he got it calmed down, Line was streaking away for the victory. The final numbers showed Line crossing with a 6.580 at 212.06 mph to Coughlin's 6.678 at 210.77 mph.

"We had our old buddy Jason there and I really liked our chances," Coughlin said. "The car just spun up early in the run so I started going through the gears to quiet it down. We had a pretty good drag race but that early section knocked just enough breath out of us to give him the edge.

"We're still very pleased with how we're running and I don't expect any letdown next weekend in Atlanta."

The JEGS.com/Mopar Dodge Avenger team will conclude the first three-in-a-row stretch of the season on May 3-5 at the Summit Racing Equipment NHRA Southern Nationals at Atlanta Dragway in Atlanta.