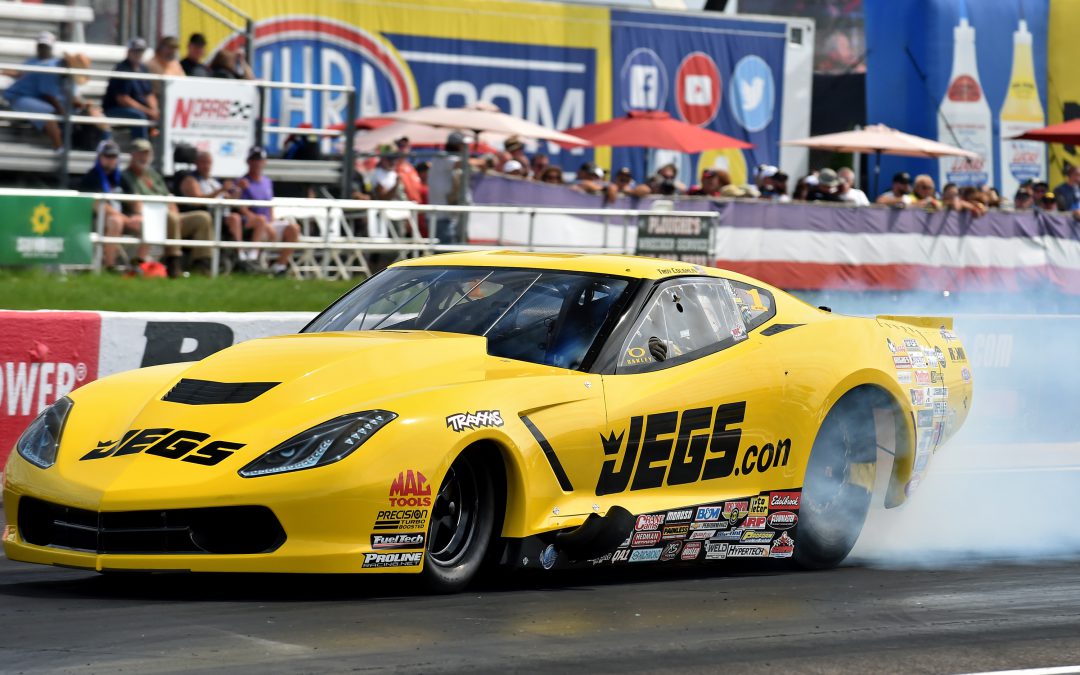 Coughlin, whose won two of the last four NHRA Pro Mod titles in his JEGS.com Corvette, opened this historic race with a booming run of 5.773 seconds at 254.76 mph Friday night that proved more than enough to secure the top qualifying position.

That effort gave him the advantage of lane choice over Whiteley by the time eliminations rolled around Sunday evening, and it didn't take much for Coughlin to streak away from his opponent with a 5.835 at 252.99 mph. Whiteley over-powered the track early in his attempt to unseat Coughlin and soon gave up and coasted to the finish line.

"It's pretty exciting and I'm really fired up," Coughlin said. "The entire JEGS.com team is fired up. This is Indy. Taking out a car and driver the caliber of Stephen Whiteley in the first round is quite an accomplishment and it's even sweeter that JEGS.com is title sponsor of the Pro Mod class at this race.

"Stephen and I were side-by-side for the first 200 feet but then he dropped back all of a sudden so I assumed he had problems. At that point we were marching so I figured it would be very hard for him to get back on it and catch us. It's super exciting when you have that feeling like the win is yours and when the light finally came on it was a big relief and a bunch of celebrating."

The last time Coughlin really had occasion to celebrate in Indy was in 1991 when he won the event outright in the cutthroat Super Gas category.

"There's great memories here for all of us," Coughlin said. "When you grow up in a family like ours, you grow up dreaming about winning Indy and we got it done early in my driving career so that was special. Now, here we are 25 years later, and we'd love to rekindle that winning feeling. There's a lot of emotions and adrenaline right now."

Troy Jr.'s final race in Super Gas was a thriller as he left opponent Charlie Flanagan on the starting line with a fantastic .009-second reaction time. Unfortunately, he gave a little too much back on the top end, losing by a margin of 9.910 to 9.932.

"It was a tight race," Troy Jr. said. "My hats off to Charlie; he got me there at the top end.

"It's been a great weekend all the way around, win or lose. I loved watching my Aunt Samantha, my Uncle Jeg and my dad race and that's always special. Dad's doing great in Pro Mod so that's exciting. I have to hand it to my crew chief Justin Beaver also, because he did a great job with both of my cars."