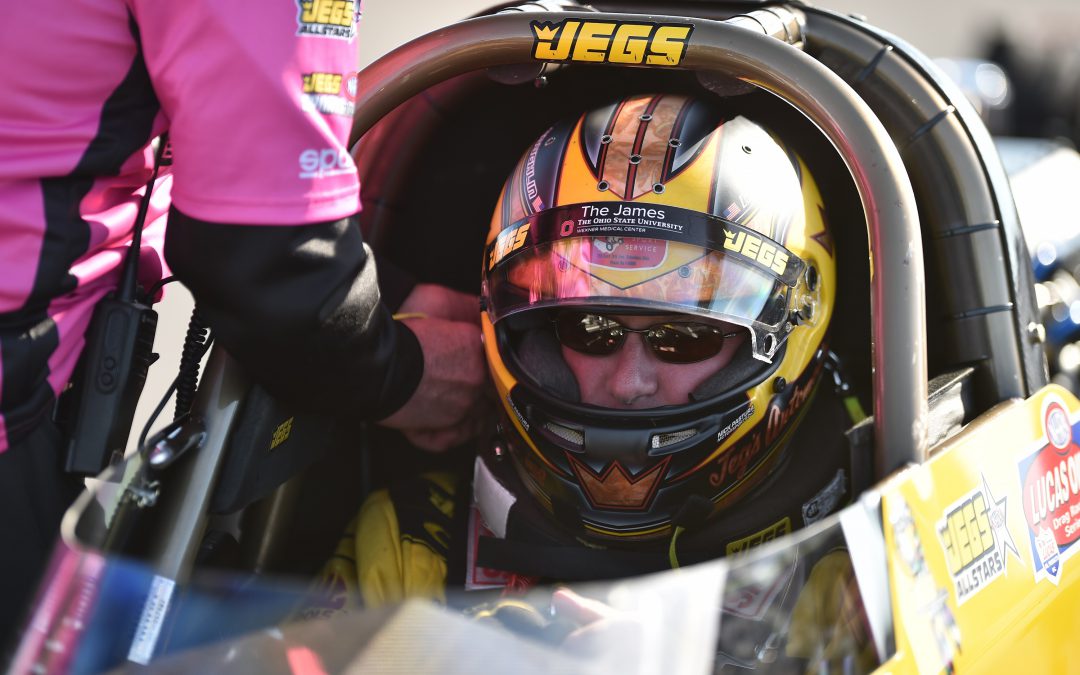 MADISON, Ill. (Oct. 18) — With just two races left in his season, Top Dragster drag racer Mike Coughlin is hoping this weekend's All-American Hot Rod Showdown at Gateway Motorsports Park will be enough of a success that he can further zero in on this year's Lucas Oil Drag Racing Series world championship.

Coughlin currently ranks third in his class, both nationally and in the North Central Division, and a successful outing in St. Louis could be pivotal in his dream of earning his first national title and third divisional crown.

"We were here just two weeks ago and walked away with a runner-up result so considering I can start bettering a previous finish in the first round, we are very optimistic," Coughlin said. "We didn't do much to the JEGS.com Dragster since we left other than a very slight update to the tune-up. The weather will be better so we wanted to adjust to that change. Otherwise, nothing needed to be fixed.

"The numbers from two weeks ago were really fast and it should only be better this weekend with the slightly cooler temps. This is the final D-3 race and for whatever reason, we have turned out to be the fastest division in the country so the competition is always very intense. It’s made for a really fun year and whoever ends up champ will have definitely earned it."

With the unwavering support of crewmen Greg Cody, Dave Raurk, Ryan Micke and Tony Collier, Coughlin has been competitive all year. He won the season-opening 57th annual Circle K NHRA Winternationals in Pomona, Calif., and later captured the D-3 race in Indianapolis. At practically every other race, he's racked up multiple round wins.

"It's been a banner year and I'm so proud of the team," said Coughlin, a two-time D-3 champ in Top Sportsman. "I've been able to race a bunch with my boys, Clay and Jack, my brothers Jeg and Troy, my nephew Troy Jr., and here lately with my niece Paige. In fact, she'll be racing her Super Comp dragster here this weekend. I'm a happy guy."

Paige Coughlin, the daughter of two-time Pro Mod champion Troy Coughlin, who is currently ranked No. 1 in the world, last raced in the Lucas Oil Drag Racing Series two months ago at the D-3 race in Bowling Green, Ky. But the high school senior hasn't been sitting idly by as she's competed in several bracket races around her home in Delaware, Ohio.

"I've been learning top bulb racing on the eighth-mile, trying to get as much experience and seat time as possible," Paige said. "My brother (Troy Jr.) also took my JEGS dragster to the Fall Fling in Bristol and went several round every day to get it as close to perfect as a racecar can be.

"This year has been about learning. Next year we plan to be much more competitive and really race for some wins. Still, this weekend's race is something I'm taking very seriously because I'd love to get a win before the year's over."

Paige will not only get plenty of support from her Uncle Mike, but father Troy and brother Troy Jr. also will join her this weekend.

"Yeah, Dad just won there in his Pro Mod car so hopefully some of his good luck will rub off on me," she said. "And T.J. is the best coach. I'm glad they're coming to help."

Gates open at 9 a.m. every day. Qualifying and time trials begin Friday at 9 a.m. and continue Saturday at 9 a.m. Eliminations will begin Saturday afternoon and continue on Sunday. Spectator admission for the All-American Hot Rod Showdown event is $20 per carload Friday, Saturday and Sunday.