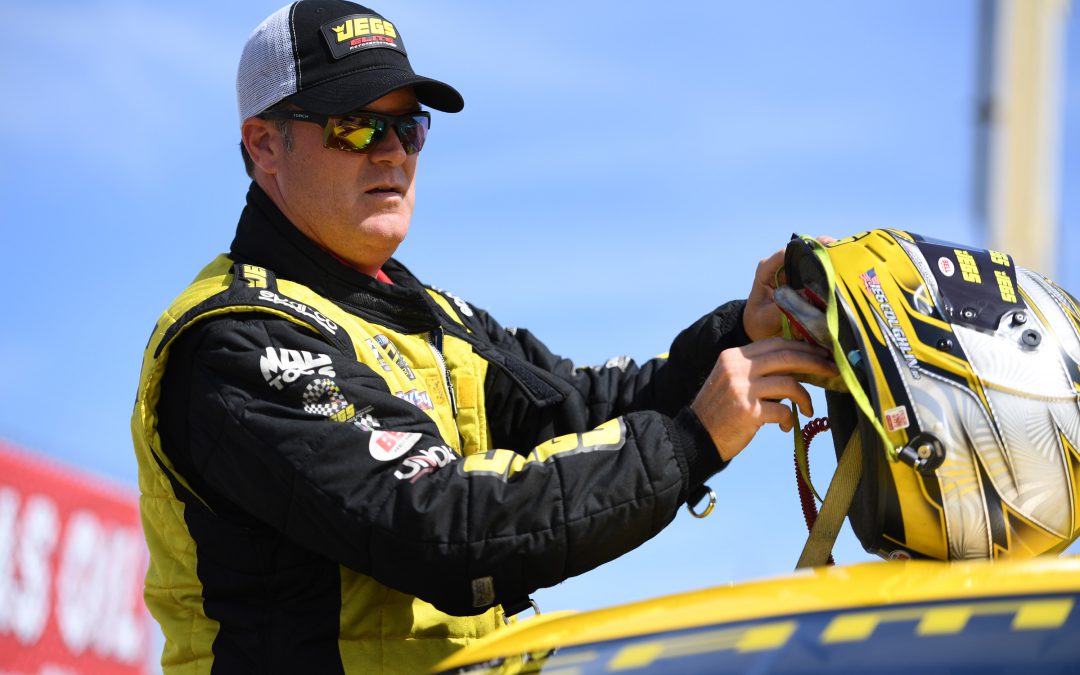 READING, Pa. (Sept. 24) — Jeg Coughlin Jr. put together a sensational first-round package that would have won six of the eight races on the docket at the 33rd annual Dodge NHRA Nationals. Unfortunately for the driver of the JEGS.com/Elite Performance Chevrolet Camaro, the odds were against him and he dropped out of contention at the hands of Drew Skillman.

"That's kind of been our trend this year," Coughlin said. "We seem to be a day late and a dollar short more often than we have in past campaigns.

"We came into this race weekend with a little bit of an enhanced set up from the Charlotte race last weekend. On Friday, we definitely lost some ground on what we were trying to do, but the guys worked hard that night and we got back on track yesterday. Today, we continued in a positive direction but obviously got into a tough pairing there in Round 1 and just couldn't quite find a way to advance."

As is usually the case, Coughlin was stellar behind the wheel, leaving the starting line with a very quick .009-second reaction time (.000 is perfect). However, Skillman launched pretty well himself, just .010 seconds behind, and was able to catch and pass Coughlin to win with a 6.613 at 209.30 mph to Coughlin's 6.638 at 208.84 mph. The final margin of victory was .015 seconds.

The only other driver in the first round whose reaction and elapsed times were quick enough to beat Coughlin was Jason Line, who defeated Alan Prusiensky with a 6.601 after a .039-second launch.

"We were capable of contending for at least a few round wins today so we're pleased to have picked up our performance a little bit in relation to the field," Coughlin said. "We'll see if we can't show up in St. Louis and make four good runs leading into Sunday and have some better options with a better draw in Round 1 than what we faced today."

The NHRA tour heads immediately to Gateway International Raceway for next weekend's sixth annual AAA Insurance NHRA Midwest Nationals, the third of six races in this year's Countdown to the Championship playoffs.

"We've got four races left to see if old yeller can climb its way to the top of the Pro Stock class," Coughlin said. "We are probably going to have to win all four of those races for that to happen. I say that with a chuckle and a smile on my face because although we've been able to do that in our past lives and this Elite Motorsports team has been able to do that as well, the reality is the other teams out here are really running well. It's a tall order, but we won't quit until they tell us it's over."