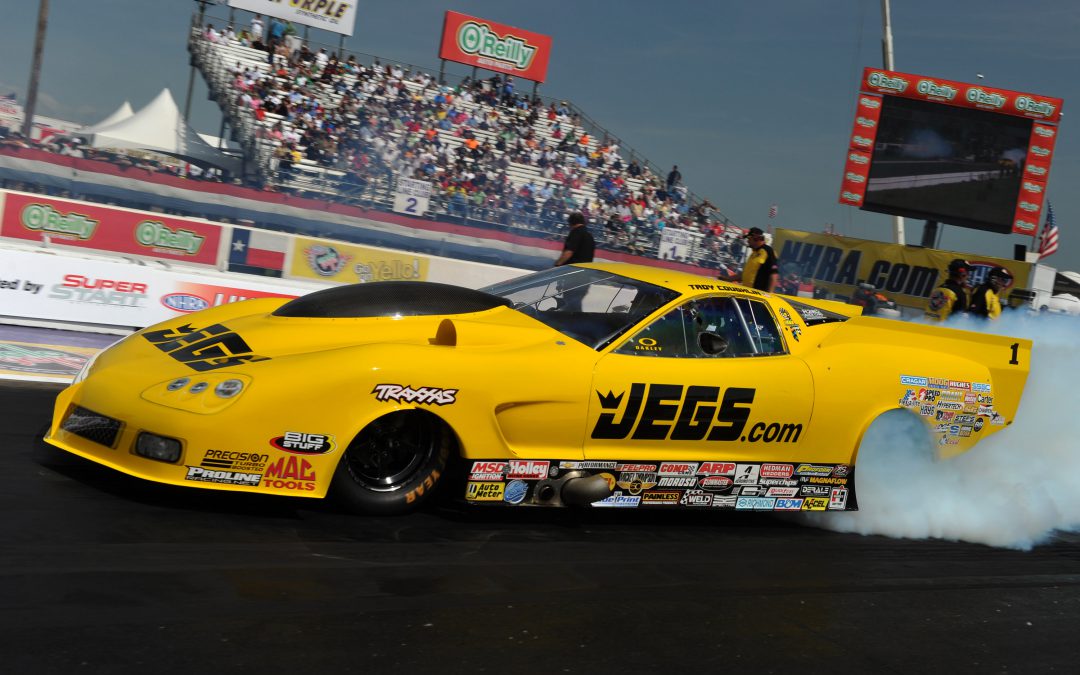 HOUSTON (April 27) – Troy Coughlin put the JEGS.com Chevy Corvette into the No. 7 spot in the Pro Mod field Saturday at the NHRA SpringNationals at Royal Purple Raceway.

Rain has played havoc with the schedule. Pro Mod's final qualifier was cancelled and the first round of eliminations were pushed to Sunday. Coughlin said he would have liked to have had another crack at the racetrack before eliminations, but his best run from Friday, a pass of 5.979 seconds at 248.71 mph, was a nice block to build from.

"We're still trying to sort out some of the new rules stuff," Coughlin said. "We had a fantastic race in Charlotte. Since we're qualified No. 7 here, we'll get lane choice tomorrow. We should be in pretty good shape."

Coughlin will line up on Sunday morning against No. 8 qualifier Von Smith, whose best lap was in 5.979 seconds at 243.90 mph.

"We're always constantly working on the car trying to see if we can't pick up the performance," Coughlin said. "The goal is to get it consistent and fast and I think we're looking pretty good."

This has been the first race of the season where the Pro Mods have had to deal with high humidity, which has been a major challenge for the team this weekend.

"The high humidity effects everything on the car and all three styles of cars in Pro Mod," Coughlin said. "It makes the engines accelerate a little bit slower and it's up to us to try and manipulate it to our advantage.

"Everything on the car is fresh and ready to roll. The further we can go tomorrow means more chances to work on the new things on the car."

Coughlin said that so far, he's been pleased with the direction of the team in the early going of the season.

"We're off to a such a better start than last year," Coughlin said. "The car is running good, the team is doing fantastic. It's pretty awesome and it's only going to get better from here."

Racing at the NHRA SpringNationals resumes at 8 a.m. Sunday from Royal Purple Raceway.