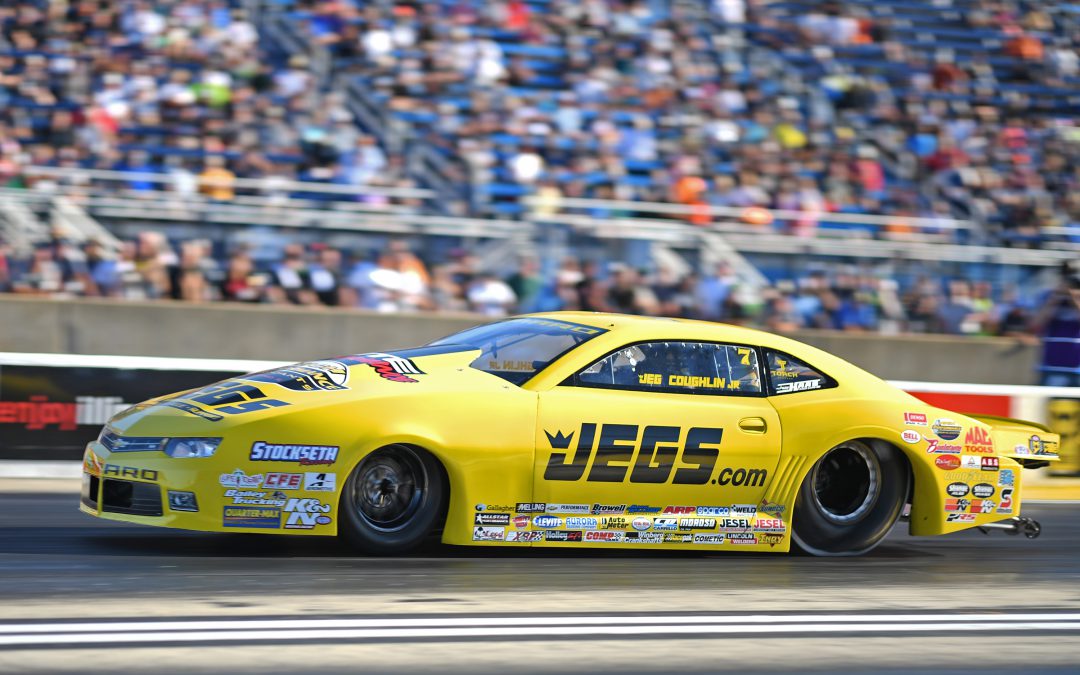 NORTH DINWIDDIE, Va. (June 6) — Fresh on the heels of one of the biggest individual wins of his career Sunday at the JEGS Route 66 NHRA Nationals in Chicago, five-time Pro Stock champion Jeg Coughlin Jr. arrives at Virginia Motorsports Park with the car to beat at this weekend's Virginia NHRA Nationals.

In Chicago, Coughlin dominated race day in his JEGS.com Elite Performance Chevrolet Camaro, posting the lowest elapsed time of every Pro Stock elimination round. It's a trend he hopes to continue in Virginia as he races alongside his brother Troy Coughlin, who is making a return to Pro Mod, his niece Paige Coughlin, who is racing in Super Comp, and his nephew Troy Coughlin Jr., who is racing in Super Comp and Super Gas.

"Chicago was certainly a huge, huge win for us," said Jeg Jr., who will be pulling double duty in Virginia racing in both Pro Stock and Super Comp. "It felt like the culmination of this wave of momentum we've been building for a couple months now with much improved qualifying positions and better runs on race day.

"We finally turned that final corner at the JEGS Route 66 Nationals and got that long-awaited win. I can tell you, no matter how many times you've won, it's always nice to get another one and having gone the longest spell of my driving career without a win in Pro Stock, it certainly felt great to bust that streak."

Jeg Jr.'s Chicago victory was his first in Pro Stock in more than four years, a span of 74 races. It pushed his career total of Pro Stock wins to 59 and his overall national event win tally to 77.

"There's absolutely no reason to stop now," said Jeg Jr., who won the 2000 race at VMP in Pro Stock. "When you run through race day like we did in Chicago with the best car in every round, you become a believer in the fact you should be able to do that time and again.

"Our goal now is to repeat and get this JEGS/Elite Chevy to be as consistent as possible so we can have a lot more days that end in the winner's circle. If the guys continue to give me a stout racecar and I do my job behind the wheel, it should happen more and more."

Three-time and reigning Pro Mod champion Troy Coughlin, who retired at the end of last season, will return to the E3 Spark Plugs Pro Mod Drag Racing Series in Virginia after missing the first four races of the 12-race series he won outright in 2012, 2015 and 2017.

"The allure of the class was just too big to ignore," said Troy, who will pilot a twin-turbo JEGS.com 1967 Ford Mustang. "I've been coming to the races to watch and help my kids race and, of course, I've been up there watching the Pro Mod cars when they run. I realized I was already missing the competition and the camaraderie among the racers.

"Steve Petty (crew chief) and the guys are still behind me 100 percent. Eric Dillard and everyone at Pro Line are involved. Aside from the car, all the same pieces are in place and we haven't been out long enough that I'm worried about my driving. We've won three titles and 12 races in the last decade so we pretty much know what to expect. We'll be ready to have some fun for sure."

With no Top Alcohol classes being contested in Virginia, Troy Jr. decided to keep his driving skills sharp by joining sister Paige and Uncle Jeg in Super Comp. He will also contest the Super
Gas category.

"I always love racing in Richmond," Troy Jr. said. "For one, the fans are awesome, and it's a great facility as well. Plus, my dad is back in Pro Mod and he's my hero so I'm super excited to share the pits with him again.

"What gets me fired up whenever I race in the super classes is the fact you can win if you're truly up to the challenge of ultimate focus on what's going on with the wind, the air and the track. It's all about focus and instincts."

Recent high school graduate Paige, 17, is hoping for better luck as she continues her inaugural season in Super Comp.

"I really want to start going rounds at every race," Paige said. "Justin Beaver and Tony Collier give me a perfect racecar every weekend and the best way I can say thank you to them is by having some success on the track. Super Comp is a very tough class and everyone I race seems to have a ton of experience so I'm soaking up everything I can trying to get better each race. I'm also very excited to watch my dad race again. He's the reason I drag race."

"I'm pumped up to race with Paige, T.J. and brother Troy again as he returns to Pro Mod following his brief retirement," Jeg Jr. said in conclusion. "It's so much fun to have him back and to race again with his kids like we have several times already this year. Who knows, with me racing in Super Comp too we may get a chance to line 'em up and go head-to-head."