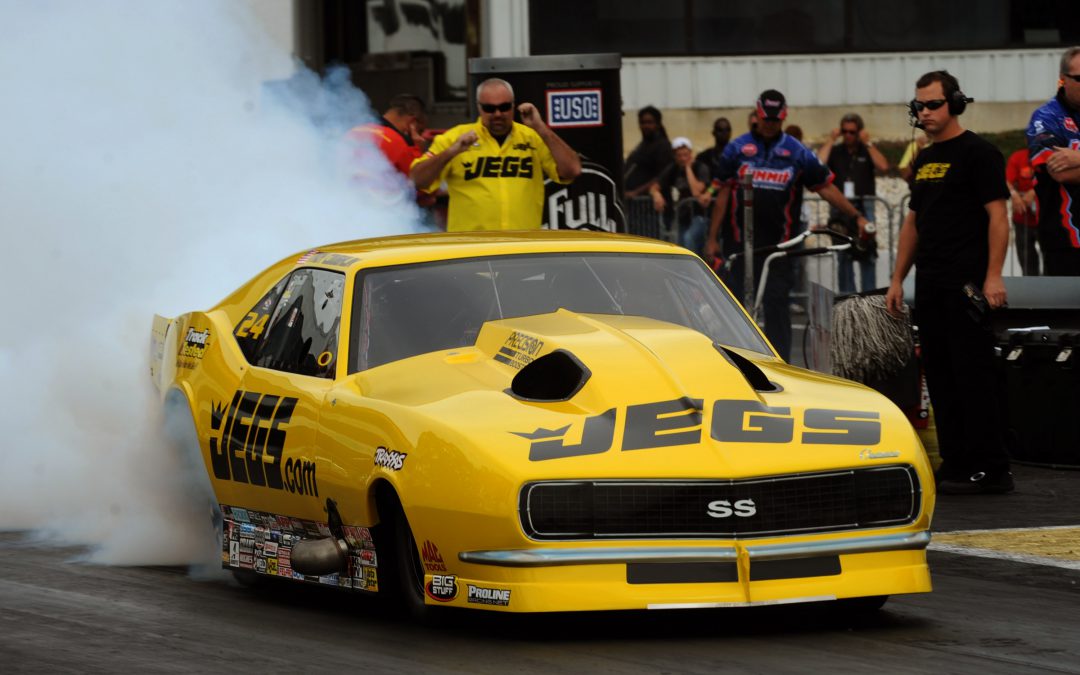 Coughlin, who qualified No. 6, took out Rickie Smith in the first round of eliminations Saturday. Smith was second in the Pro Mod points standings heading into Gateway, with Coughlin sixth, 85 points out of the lead.

Sunday, Coughlin faces Leah Pruett, who is fifth in points, in the second round.

"It will be real important," Coughlin said. "Leah's a pretty tough driver and she's got a good car. Roger Burgess' stuff is top-notch. We're going to give it our all. We're going to throw the kitchen sink and the TV set at it."

Coughlin's had a solid weekend with the JEGS.com Camaro thus far. After a decent pass in the first qualifying session, Coughlin picked it up with a run of 5.924 seconds at 248.43 mph to grab the No. 6 spot in the field.

"Going into the first round, we knew we had to run fast," Coughlin said. "Rickie Smith is a championship-caliber guy, second in the points. If there's an opportunity for us to move up, this would be it. We're good friends with Rickie, and he's a super guy, but this is racing."

The team will look for more speed against Pruett in the second round.

"I'm pretty excited with the performance of the car in the first round," Coughlin said. "It made a decent run. It wasn't as fast as everybody's else's stuff, but we found a couple things we can tweak a little bit, we'll see if we can get it to run in the mid-6.80s tomorrow. It's got it. We've just got to keep pecking away at it."

Coughlin is part of an important for Team JEGS, as Jeg Coughlin Jr. is racing Pro Stock in Gateway, Cody Coughlin is racing in the JEGS/CRA All-Stars Tour in Indianapolis, and Troy's son, T.J., is racing his Super Gas car in Bristol, Tenn.

"It's a big weekend for the JEGS team," Coughlin said. "I'd love to see us all do well."