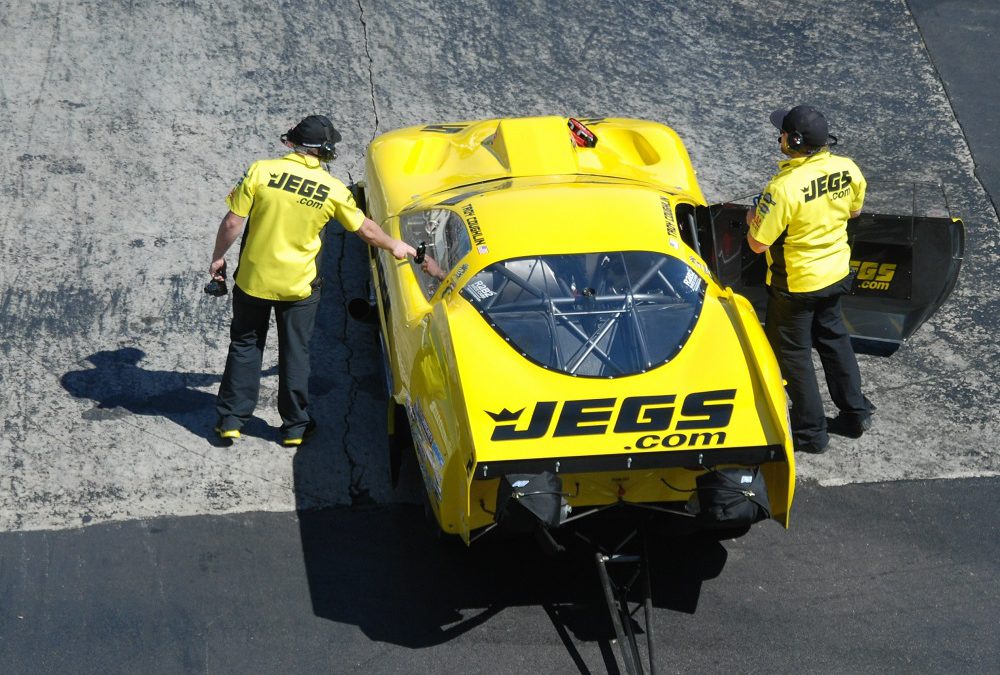 GAINESVILLE, Fla. (March 15) – JEGS.com Pro Mod driver Troy Coughlin would rather have started in the top half of the field, but he remains confident in his race team for eliminations for the Amalie Motor Oil NHRA Gatornationals this weekend at Auto-Plus Raceway at Gainesville.

Coughlin ended up No. 13 after two solid passes on Saturday, and he'll square off against No. 4 qualifier Jason Hamstra.

"We're looking pretty good for race day," Coughlin said. "We ended up 13th, but we're in, and that's all that matters. You can win from just about any position; you've just got to be in the elite 16.

"I would've liked to have qualified in the top three or four, but we'll just have to wait to the next race to do that. We're looking pretty good for tomorrow."

A slight change to the Pro Mod schedule format for the weekend meant Coughlin made only one pass on Friday. In Q1, crew chief Steve Petty installed an aggressive tune-up, and Coughlin's turbocharged Corvette overpowered the race track with a pass of 8.766 seconds at 122.32 mph.

"We started off on the aggressive side," Coughlin said. "We came back and made some good tune-ups and picked the car up a little bit, and then a little bit more. We spun the tires a little bit on the last run."

Now, Coughlin and the team prepare for the first round of eliminations Sunday, when he will face Hamstra, whose best pass was 5.866 seconds at 246.30. The first round begins at 9:30 a.m.

"It's a little bit different challenge," Coughlin said of racing so early in the morning. "We won't be sweating like we are right now. We've raced a couple times at 9:30 in the morning, and we'll have to see how it goes. It's the same for everybody."

Coughlin believes he has the best team in Pro Mod, so he's not worried about the early morning run.

"Steve and all the guys, Mike Rees, Bryan Metzenheim, Kyle Pettis, it's a good group of guys," Coughlin said. "We'll get down the track, for sure, and it'll be fast."