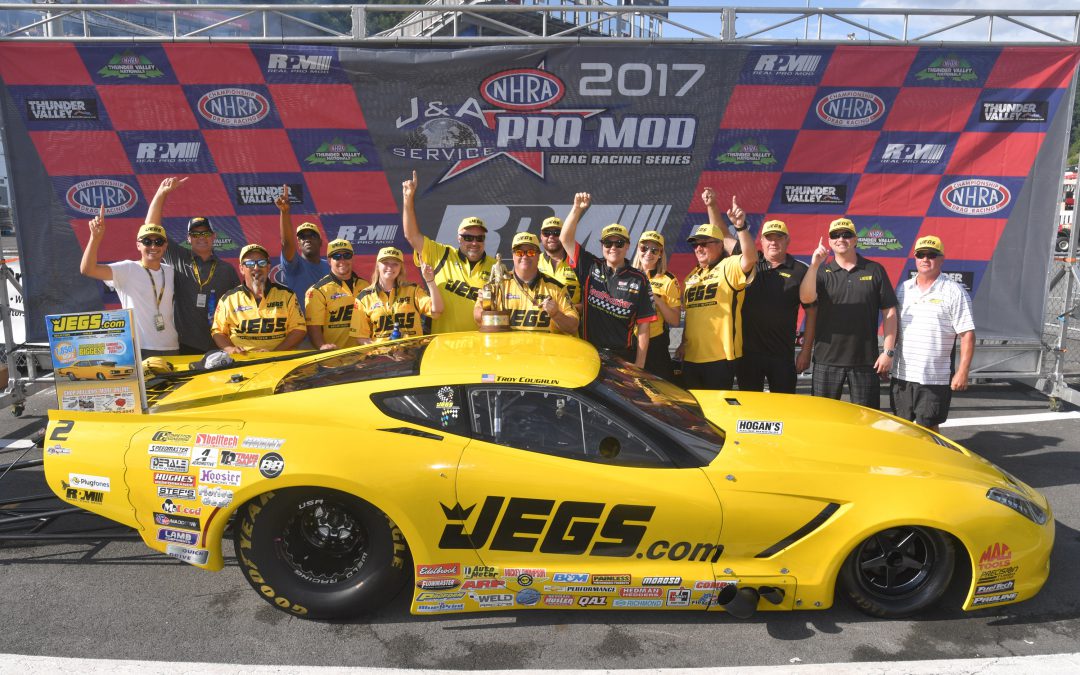 Just a little over a week ago, the 2012 and 2015 titlist was a distance fifth in the rankings, 234 points behind early-season class dominator Mike Castellana, but a runner-up finish last weekend in Englishtown, N.J., and Sunday's win at Bristol Dragway, coupled with a rough couple of races by Castellana and others ahead of him in the points, have helped Coughlin rise to second place, 105 out of the lead.

"We've had a fantastic car for the last two races, for sure," Coughlin said. "It's true we struggled a little bit in the middle part of the first half of the season but we are coming on strong now and nipping at the points leader's heels.

"What can I say about my guys? Steve Petty, Kyle Pettis, Mike Rees, all of the guys on the JEGS.com team back home and everyone from Proline and Mac Tools that help our winning effort, we just have a badass group all the way around. I tell you what, that Proline power and all the JEGS.com parts they put in this car helped get this baby to the winner's circle today, no doubt about it."

Coughlin's toughest test Sunday came in his quarterfinal race against Bob Rahaim. Although he got a .007-second jump on Rahaim, he was soon passed and had to use all the power in his twin-turbo JEGS.com Chevrolet Corvette C7 to catch Rahaim and retake the lead, winning with a 5.890 at 253.95 mph ahead of Rahaim's 5.933 at 246.66 mph.

"Molinari is a threat to the championship, that's for sure," Coughlin said. "The three guys I raced today are all very good. I don't see any weak spots in the field right now. The cool thing is that the wins are so much harder to come by than ever before so it's that much more satisfying. I'm gonna make sure the guys enjoy this one.

"I'm also pretty excited that my son was here to share this day with me. I wish he had won Top Fuel but he'll get there soon enough. We'll load up and head home and take this trophy over to Dad and let him enjoy the moment also. What a deal!"

The drivers in the J&A Service Pro Mod Drag Racing Series will now head immediately to Norwalk, Ohio, for next weekend's race. Coughlin lives just 90 miles away from the Northeast Ohio drag strip in Delaware, Ohio.