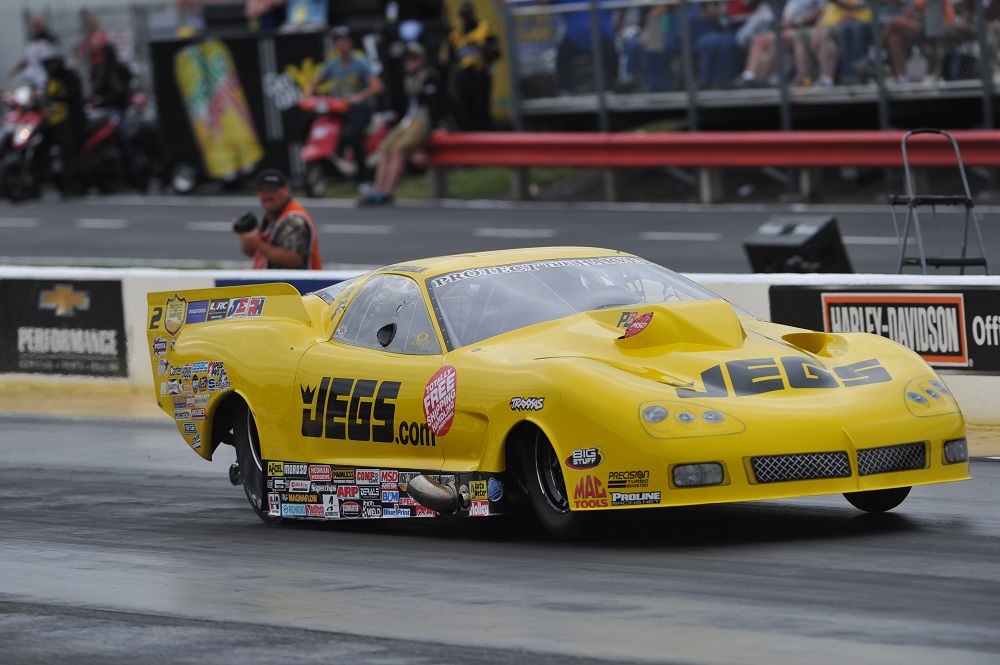 ATLANTA (May 19) — Troy Coughlin and the JEGS.com team went down swinging in the second round of the rain-delayed Real Pro Mod Association NHRA race Monday at Atlanta Dragway.

Facing No. 1 qualifier Rickie Smith, Coughlin and his Steve Petty-led team knew they had to be at their best. Coughlin was stellar on the Christmas Tree, but his Corvette overpowered the surface, allowing Smith to run away with the victory.

Coughlin left first with a .025-second reaction time, half of Smith's .050, but Coughlin's car moved right toward the wall and he was forced to get out of the gas.

"We have a fast, competitive car, no doubt, but Rickie's car is fast," Coughlin said. "If you're going to try and run with them, you have to set the car up to compete with them and do whatever it takes to try and get everything out of it. We're definitely putting our best foot forward. He's just got a fast car."

Coughlin qualified in the top half of the field at No. 8, which is an accomplishment in itself with the increased competition in Pro Mod. The Real Pro Mod Association, with backing from Redhorse Performance, JE Pistons, Pro Line Racing, Larry Jeffers Race Cars, Powerocks, and ProtectTheHarvest.com, has helped bring the best Pro Mod racers in the country to NHRA. So when the No. 8 qualifier wins in the first round, he faces an uphill battle against the pole winner.

"They can be beat," Coughlin said. "His car today is just really fast; the nitrous cars are just fast. We're going to keep picking at this thing. We've picked and found a couple of things and we keep picking little things up. We're trying to make it accelerate better and work quicker in the front half of the track.

"Steve, Mike (Rees), Bryan (Metzenhiem), and Kyle (Pettis) are doing a great job. We're not getting shut off because of leaks and everything is spotless. Those guys are definitely doing a good job. We've just got to keep picking away."