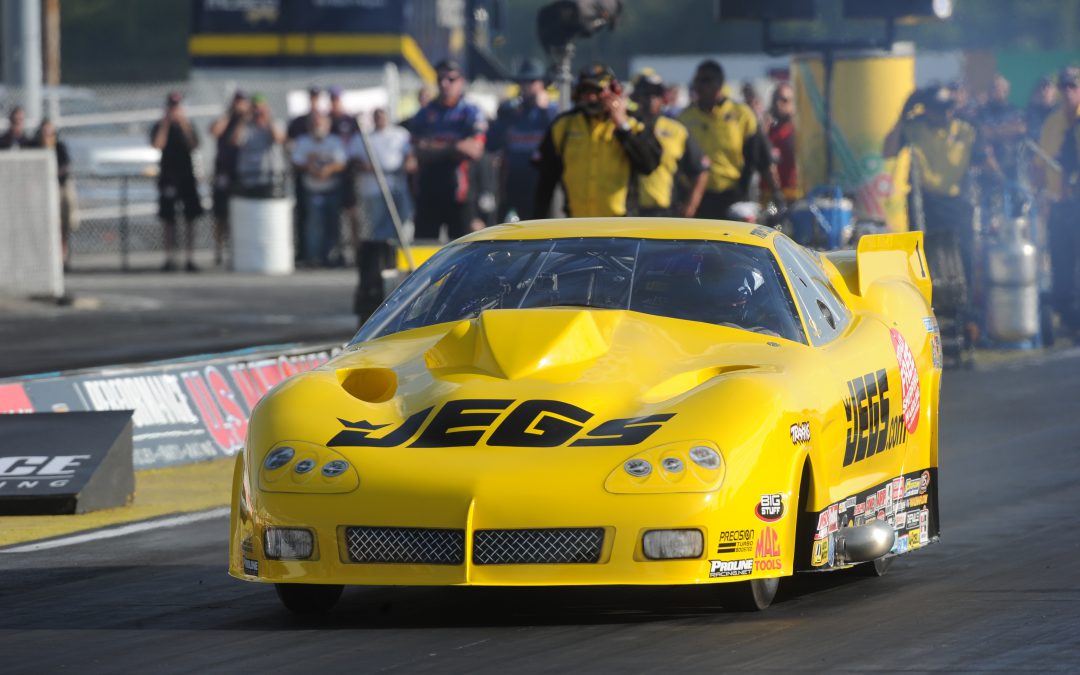 INDIANAPOLIS (Sept. 1) – The round win by JEGS.com Pro Mod driver Troy Coughlin was almost an afterthought at the U.S. Nationals on Sunday at Lucas Oil Raceway.

As Coughlin sped to the victory in the first round, his opponent, Tim Tindle, was slamming the wall and flipping over the barrier. Tindle climbed out on his own and was apparently OK, and his condition was Coughlin's first concern.

"I didn't know there was a wreck until I could see the trucks coming up the track," Coughlin said. "Then the guys on the radio said, 'Is everything all right?' because they couldn't see that well. I said, 'Yeah.'"

Coughlin's team told him Tindle hit the wall pretty hard, and they could see his car flip.

Secure in the knowledge that Tindle was OK, Coughlin turned his attention to his solid pass, a run of 5.977 seconds at 244.43 mph that was better than his qualifying runs.

"The car made the best run of the weekend," Coughlin said. "It's not for a lack of effort. (Crew chief Steve) Petty and all the guys have been working their tails off trying to get this thing to pick up. I'm pretty excited. We were shooting  for a 6.02 or .03, hoping it would run somewhere in that range.

Coughlin will face Kevin Fiscus in the second round of Pro Mod eliminations on Sunday after Fiscus took down Eric Latino. Fiscus is the No. 3 qualifier after a pass of 6.004 seconds at 243.15 mph.

Coughlin's team battled various issues in qualifying but worked to get better. His best pass was 6.069 seconds at 233.44 mph, run in the third session.

"We had a couple electrical gremlins that were hurting us through the last couple of runs," Coughlin said. "The first run, we had some stuff in the ignition system that wasn't where they wanted it to be. We just had to jump up and get it done quick.

"We went back to some tuneups that we had done before. It was like an 'Old Faithful,' and it turned out to be pretty good. Pretty awesome, no doubt."

Then came the pass in E1, putting a wide smile on Coughlin's face.

"It's a nice change from the first three runs to the first round," Coughlin said. "It's been pretty cool. We'll keep thrashing at it and see what we can do next."