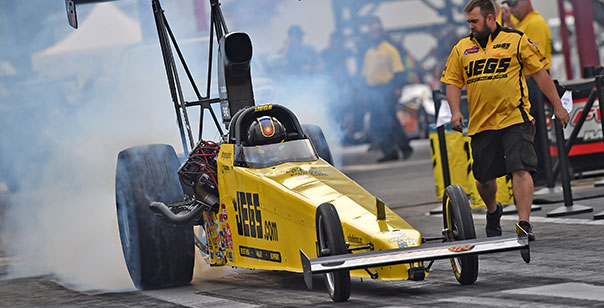 "It's great to be back with the A Fuel guys," Said Coughlin, who has raced in Super Comp and Super Gas the last few weekends to sharpen his skills. "We decided to run Division 1 this year because our crew guys all have regular jobs here in Eastern Pennsylvania so their commute time to the races will be shortened quite a bit. It's a big challenge to run D1 but we're ready to get started this weekend. It'll be really big if we can get off to a good start this weekend."

Maple Grove could be the perfect starting spot. The track has quickly become a favorite for the 28-year-old, third-generation drag racer from Delaware, Ohio, especially since he started driving for McPhillips Racing, which is based in nearby Phoenixville, Pa. Recording a big victory here that put him into the national championship chase last year certainly boosted his affection for the storied facility.

"It's the home track for Rich and Rich Jr. (McPhillips) and all the crew guys live close by also so it's a race track where we know we'll have a lot of support," said Coughlin, who eventually finished fourth in the national title hunt. "I know everyone has family and friends planning to come out so we want to show them a good time, just like we did last fall.

"D1 is no joke and we're not taking it lightly. When you look at racers like Jackie Fricke, Josh Hart, Duane Shields and so many other top teams, it's pretty daunting. But I have a lot of confidence in the ability of this team. We won a championship already and we'd love to do it again this year."

"It was a great year and we set the bar high so we're looking to pick up right where we left off and try to do even better," Coughlin said. "This is a talented team. Andy Goode, Duke Rooney, Charlie Wroten and Charlie Greco, they proved they know how to get it done at the top level.

"For me, I'd love to be the first Coughlin to win a Division outside D3, which is our home division over in Ohio. The regional thing is new but it would be great to follow up our North Central Region championship with an Eastern Region championship. Of course, we want to run for the national title too. We have plenty of goals; now it's time to race and see how we do."

Coughlin and crew will get three cracks at the track in qualifying with sessions scheduled for 1, 4 and 7 p.m., Friday. The action will then turn to eliminations with Round 1 slated for 5 p.m., Saturday. If he advances, the semifinals and finals will be held at 7 and 9 p.m., respectively, also on Saturday,

"We are really proud as a team to have the support of JEGS, Global Electronic Technology, Weld Racing, Amalie Oil, ARP, Boninfante Friction, Mac Tools and NGK Spark Plugs," Coughlin said. "These partner's products help us on and off the track. It’s honor to have the support from each of them as they give us the tools to win."