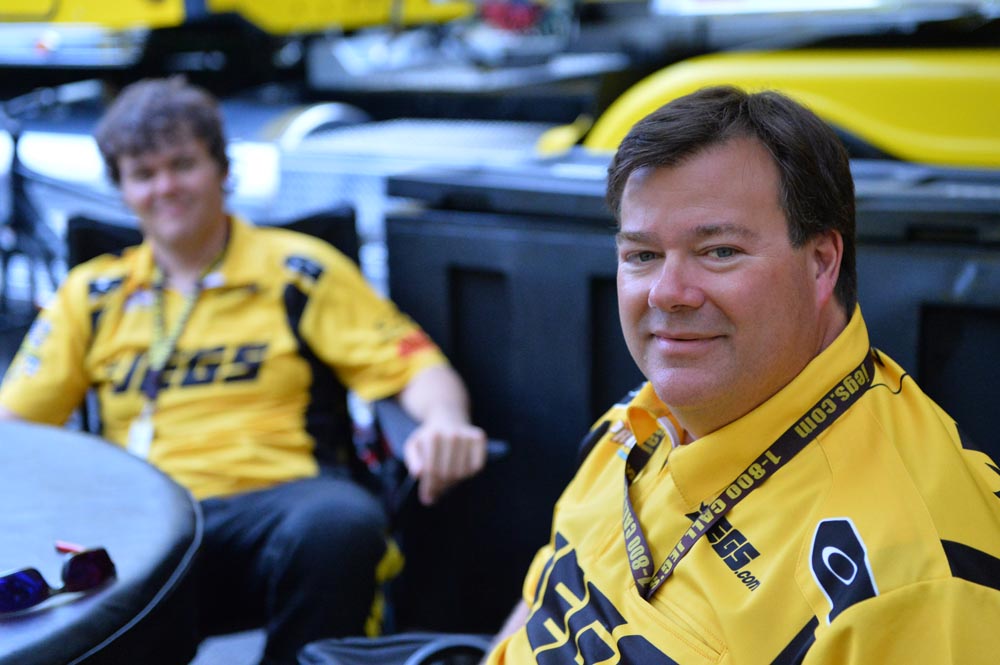 ENGLISHTOWN, N.J. (June 6) — JEGS.com driver Troy Coughlin Jr. is confident he can get the job done in the NHRA J&A Service Pro Mod Drag Racing Series race presented Smithfield Foods and Western Beef, but he says another driver is the one to beat at the Toyota NHRA Summernationals at Old Bridge Township Raceway Park.

That would be his father, Troy Coughlin Sr.

"Hopefully, that's a true statement," Troy Sr. said. "That's definitely the goal tomorrow, to win three more rounds and try to keep this JEGS.com car cruising. It's definitely running much better. It's a new car this year, and (crew chief) Steve (Petty) and the guys are getting a good handle on it."

Both JEGS.com drivers pulled off first-round wins on Saturday to advance to Sunday's final eliminations.

Troy Sr. qualified fifth earlier Saturday but then ripped off the best elapsed time in his first-round win over Pete Farber. Troy Sr.'s pass of 5.821 seconds at 255.68 mph overcame a strong pass from Farber, 5.826 at 250.46 mph.

"Thanks to Steve Petty, Mike Rees, Kyle Pettus, Scott Woodruff, Brandon Stroud, Justin Beaver, and all the guys at Pro Line for standing behind us," Troy Sr. said. "They kick pretty hard from the back. We're fighting."

Troy Sr. was in the lanes when he received word that his son beat Danny Rowe in the first round.

"It's so exciting, and it definitely revs you up," Troy Sr. said. "My dad told me years ago, 'You won't know how fun it is to race with you guys until you have kids on your own.' I was always like, 'Yeah, OK, I hear you.' Now that we're here, it's a true statement, and I know what he's talking about. We couldn't do this without Mom and Dad and all the parents. It was an awesome first round."

"Everything's working great," Troy Jr. said. "We've got the bugs worked out of it, and the car feels fantastic. We've got a great surface to race on, and there's no reason why we shouldn't take her to the checkers."

Troy Jr., too, credited all the JEGS.com team members for outstanding work in Englishtown, helping him bounce back from not qualifying in Atlanta. Troy Jr. knew he had a strong car from the first hit on Friday, when his initial run was 5.926 at 249.39 mph to put him at No. 4.

Troy Sr.'s second-round opponent will be Billy Glidden, who beat Steve Matusek in the first round with a pass of 5.885 at 245.72 mph.