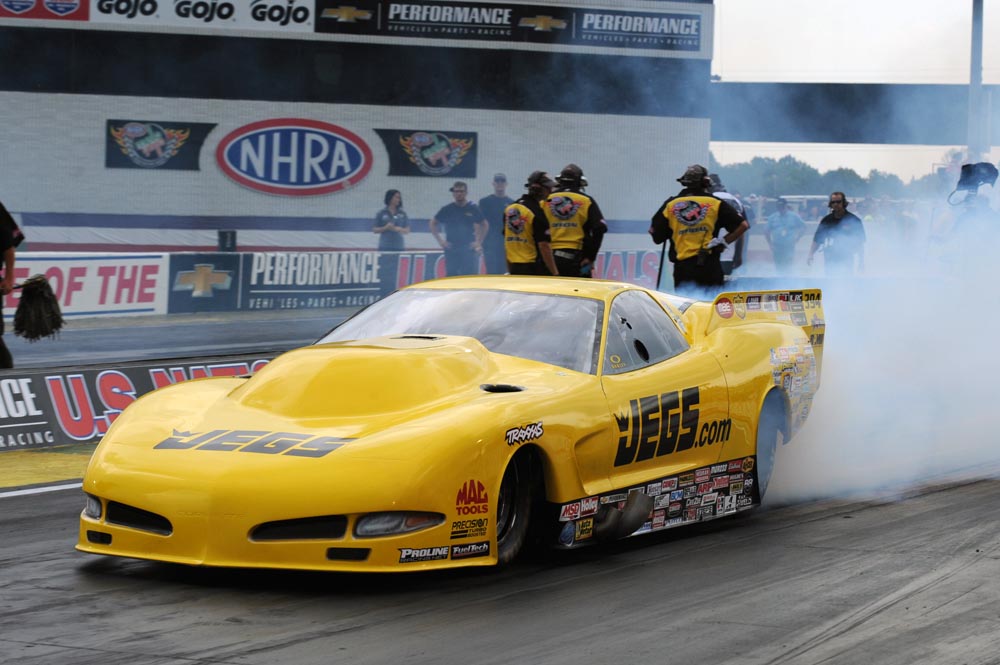 INDIANAPOLIS (Sept. 6) — JEGS.com driver Troy Coughlin Jr. will get to fulfill a lifelong dream when he takes part in driver introductions for the JEGS.com Pro Mod race during the Chevrolet Performance U.S. Nationals on Monday at Lucas Oil Raceway.

Coughlin won in the first round of the J&A Service Pro Mod Series event on Sunday, meaning he'll get to participate in pre-race festivities Monday.

"I've dreamed about doing driver intros at the U.S. Nationals for as long as I can remember," Coughlin said. "I can't wait to do it with Uncle Jeg tomorrow."

Coughlin, who qualified No. 8, advanced with a holeshot victory over Clint Satterfield. Coughlin's pass of 5.929 seconds at 252.24 mph was a tick slower than Satterfield's 5.928-second run at 249.95 mph, but Coughlin's .032-second reaction time gave him the victory.

"Any way to turn on the beacon is satisfying, especially here at Indy," Coughlin said. "This place rocks. This is such a cool race, and it's got so much history."

And the Coughlin family has plenty of history, too, winning the U.S. Nationals nine times. Coughlin has two of those victories in Sportsman racing, and he'd love to add to that total.

Coughlin faces No. 1 qualifier Khalid alBalooshi in the next round after alBalooshi beat Don Walsh with a pass of 5.918 seconds at 244.78 mph.

"Steve (Petty), Brandon (Stroud), Kyle (Pettus), Justin (Beaver), and Mike (Rees) have all got this thing pristine. They've got a handle on the chassis, and I can't say enough about my guys. It's running."

Troy Coughlin Sr.'s JEGS.com Corvette had been running well at Indy, too, but he dropped a first-round match with Mike Janis after he lost traction early in the run.

"We were making good runs," Troy Sr. said. "When you're running people like Janis, he's capable of going just as fast as we were, so we had to be on top of everything and cross every T and dot every I. We did a good job, but we just broke traction about 120 feet out and the car didn't like it.

"I pedaled a little bit and got back on it to see what would happen, but he was pretty far out there. We'll have to make sure we've got all our ducks in a row for the next race and head to Charlotte."