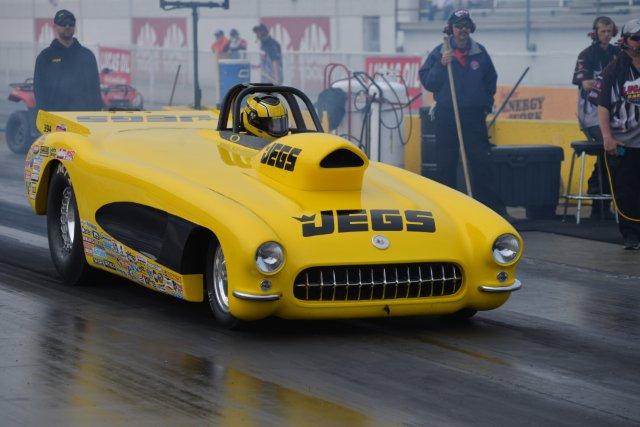 JOLIET, Ill. (June 10) – As he continues his pursuit of dual championships in Super Comp and Super Gas, Troy Coughlin Jr. helped his cause with a pair of late-round finishes at this weekend’s NHRA North Central Division Lucas Oil Series event at Route 66 Raceway near Joliet.

Coughlin drove his JEGS.com dragster to a Round 3 finish in Super Comp and Round 4 showing in Super Gas with his JEGS.com Corvette roadster. Typical of Super-class racing, both heats were very close at the finish line.

"We had an okay weekend," Coughlin. "It could have gone better but that’s the nature of Super Comp and Super Gas. Sometimes you can do everything right and it still isn’t enough or you can do a lot of things wrong and you somehow find a way to win. This weekend we did a lot of things right but just didn’t make the right moves when it counted in those later rounds."

In Super Comp, Coughlin gained a sizable advantage against opponent Michael Jirousek but could only run an 8.93 on the 8.90 index, allowing Jirousek to win with a perfect 8.90. A short time later, he returned to face Justin Ford in Super Gas and faced a similar dilemma. Once again, Coughlin’s sharp reflexes allowed him to leave the starting line first and once again, he was passed just before the finish line as Ford won by a 9.91 to 9.94 count.

"I had decent focus all weekend, but we missed the set-up with our [throttle-stop timers] and I ran slow in both races," Coughlin said. "The wind was very tricky all weekend and that made it really challenging to dial the car but everyone else had to deal with the wind also."

Coughlin boosted his points total in both classes, but really helped his cause in Super Gas where he added 61 points to his score and solidified his ranking among the class’ top five drivers.

"Yes, we have a good score but I’m going to need more wins for sure if we’re going to compete for the championship," Coughlin said. "It’s still early and there are a lot of drivers who still have a good shot at it, including Mia [Tedesco, Coughlin’s girlfriend] and a few others. You just have to keep telling yourself that this is a marathon and not a sprint. Now we just need to focus on the next race."

Coughlin’s uncle, Mike, also raced in Joliet as he continued to get accustomed to his new Chevy Camaro Top Sportsman entry. Coughlin qualified No. 6 in the tough 32-car field with a 6.61 elapsed time but suffered an early loss when he could not run his dial-in.

"The car is great but we just need to make some more runs and learn what it likes,” said Mike, a two-time NHRA North Central Division Top Sportsman champion. "This is really an investment for the future. We know that this car will ultimately be a lot more competitive than our old one. It’s just a matter of time."