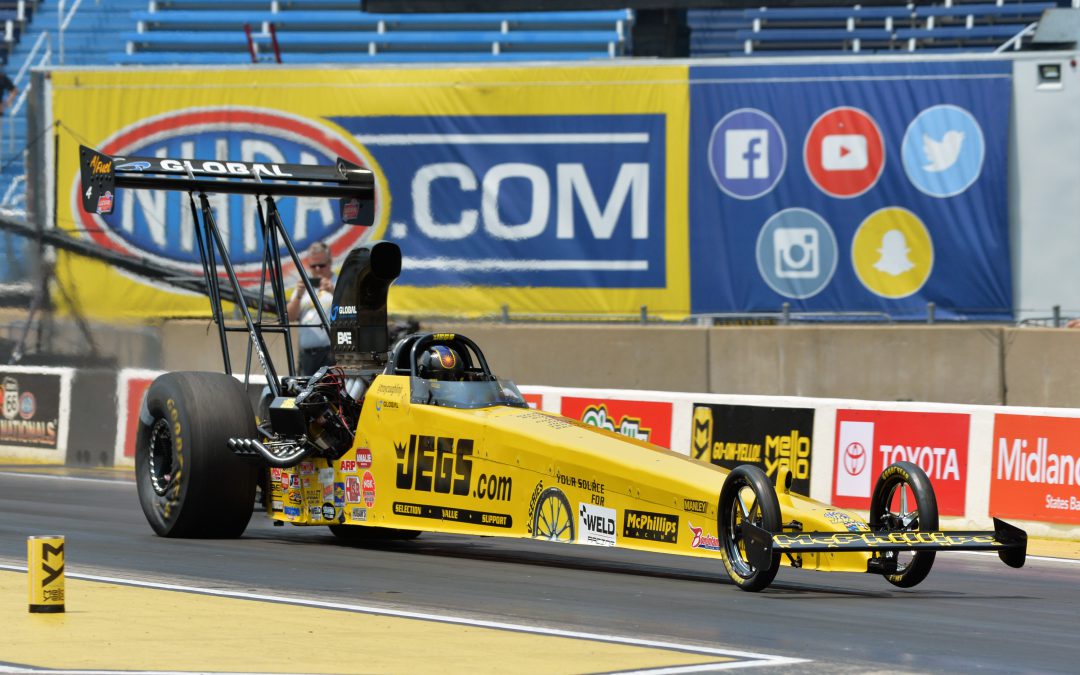 JOLIET, Ill. (June 2) — Troy Coughlin Jr. recorded a strong semifinal result Sunday at the Route 66 NHRA Nationals to lead the way for Team JEGS in the Windy City. Coughlin's oft-decorated uncle Jeg Coughlin Jr. wasn't quite as fortunate, jumping the Christmas Tree in Round 1 to hand a win to good friend Bo Butner.

After beating Josh Hart Saturday evening in the opening round of Top Alcohol Dragster eliminations, Troy Jr. stormed to the forefront in Sunday's quarterfinal round, running the quickest pass of the meet in defeating Robin Samsel with a resounding 5.209 at 278.12 mph to Samsel's up-in-smoke 14.237 at 76.15 mph.

"The entire McPhillips Racing crew had this WELD Racing At JEGS dragster set-up perfectly for that run," said Troy Jr., who left the starting line a massive .060 seconds ahead of his opponent. "They did their part and I was able to do mine.

"What can I say about Rich and Richie (McPhillips), Andy Goode, Duke Rooney, Charlie Wroten and Charlie Greco? These guys are championship caliber and I'm working really hard to be the best driver I can be to pay them back for their efforts."

"That's part of the sport," Troy Jr. said. "It doesn't make it feel any better but over time winning and losing on holeshots tends to even out. I'm not going to hang my head about a .063 light but I would still like to sharpen that number a little. I'll continue to work at getting better."

Uncle Jeg ended up posting his best pass of the weekend against Butner, a four-time winner this year, but he went foul by a scant -.003 seconds, which gave Butner the win light at the start of the race. Jeg Jr. went on to post a 6.568 at 209.49 mph in his JEGS.com Elite Motorsports Chevrolet Camaro to Butner's 6.594 at 211.03 mph.

"I felt really good up there and envisioned a .00- or .01-second reaction time but I just squeezed the trigger a little too hard and jumped the gun," Jeg Jr. said. "I was pressing, knowing how strong Bo has been all year, but I still didn't expect to see a red light.

"It's hard to be too disappointed with the way the guys reacted and set the car up for a tough first-round race in a lane that wasn't as good as the other one. In hindsight, we had a little wiggle room but I pushed too hard at the jump.

"Like always, I wish the next race started tonight. I'm super anxious to get back in the JEGS/Elite Camaro and turn on some win lights."

Jeg Jr. will return to action June 21-23 in his home state of Ohio.

Troy Jr. won't have as long to wait with the 31st annual Menards NHRA Heartland Nationals on tap next weekend at Heartland Park Topeka.