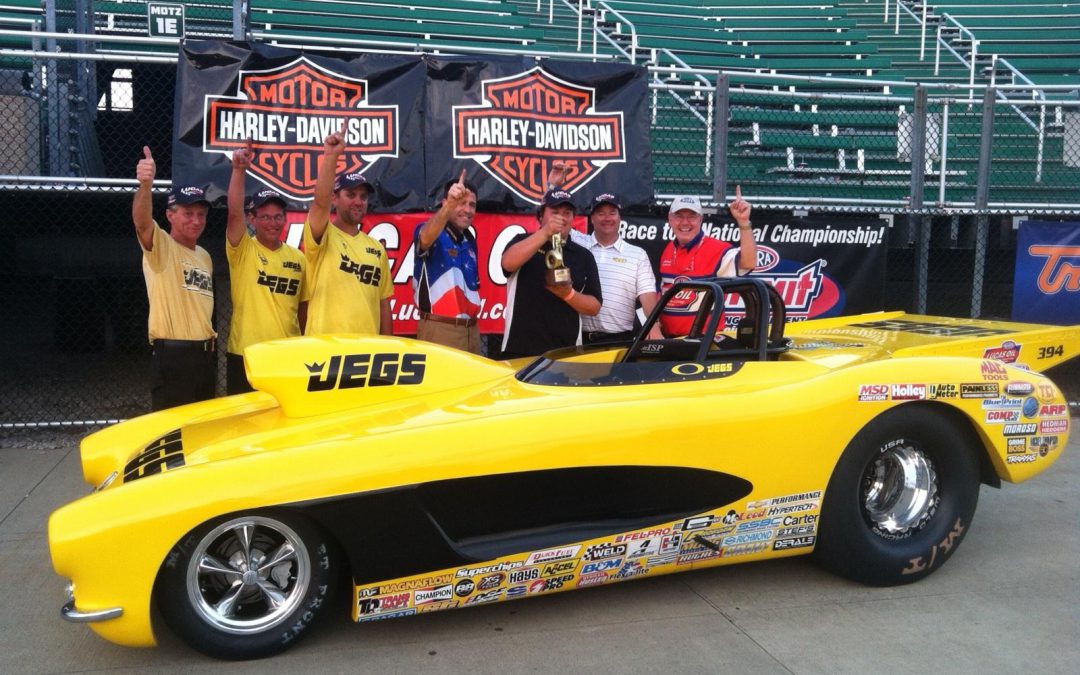 NORWALK, Ohio (May 20) – On a weekend when his uncle Jeg Coughlin Jr. recorded his 500th career round-win en route to a Pro Stock victory at the NHRA Kansas Nationals, third-generation racer Troy Coughlin Jr. reached the winner's circle himself at the Mickey Mart Rewards Cavalcade of Stars in Norwalk.

Coughlin scored a Super Gas victory at the Division 3 NHRA Lucas Oil Drag Racing Series event by running right on the 9.90 index in the final round with his yellow and black JEGS.com Corvette to defeat Doug Kroft's 9.92.

"What a great weekend," Coughlin said. "This is a big weight off my shoulders. I have wanted to win one of these [NHRA Lucas Oil] races for the longest time. My grandfather, my dad, and all of my uncles have won points meets in Division 3 and now I have one of my own. I've come close a few times but now we were able to close the deal, and it was great to do it in Super Gas because our family has had so much success in this class.

"To win on the same day that Jeg won his 500th round in Pro Stock is also a big honor. That's something not many racers ever get to do. It was a great day for the JEGS Mail Order brand. We love to race as a family, but we love to win as a family even more."

The race annually features the largest crowd among the 45 NHRA Lucas Oil Drag Racing Series events, but the big audience did not distract Coughlin, who relied on the tuning expertise of crew chief Jay Schroeder to record six runs between 9.902 and 9.929 during eliminations.

"I owe so much of the credit for this to the crew at JEGS," Coughlin said. "Everyone from my crew chief Jay Schroeder to Rick Rossiter and Greg Cody to the guys back at the shop, the men in yellow and black really delivered on this one."

In addition, Coughlin reached the third round of Super Comp behind the wheel of his JEGS.com dragster, and on Friday he went three rounds in the completion race of the postponed Indianapolis event.

After this victory and his win in March at the Amalie Oil NHRA Gatornationals in Gainesville, Fla., Troy Jr. is on a fast track toward reaching his goal of a top-10 finish in Super Gas this year.

"Right now I'm meeting my goals, but it's still way too early to start talking about a championship," Coughlin said. "I'm sure these points will come in handy later in the year, though."

Coughlin's uncle Mike drove his JEGS.com Chevy Camaro Top Sportsman entry at the event. He qualified No. 4 in the quick field with a 6.69 but lost his opening-round encounter against Tim Molnar.