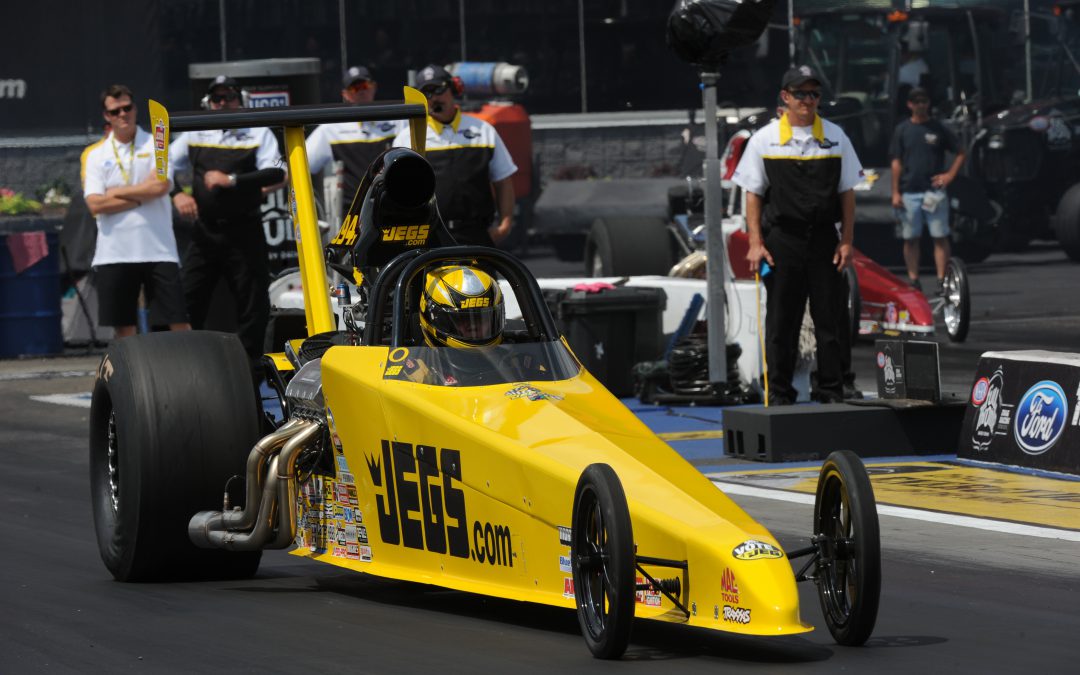 STANTON, Mich. (July 26) – One race into his Super Gas career, Troy Coughlin Jr. is anxious to get back in the saddle and try again as he heads to the Mid-Michigan Motorplex for this weekend’s North Central Division event.

Driving his JEGS.com Corvette roadster, Coughlin, who has raced nothing but dragsters for his entire career, was just beginning to get comfortable in his new surroundings one week ago in Columbus, when he committed a rookie mistake that resulted in a first round loss. As he approached the starting line, Coughlin forgot to pull the shifter back into low gear and as a result, his car lurched forward and he red-lighted.

"It’s a little embarrassing, but it’s also one of those silly mistakes that almost everyone has made at some point in their career," Coughlin said. "I did it once, learned my lesson, and now I hopefully won’t ever do it again.

"It’s a darn shame because I was really starting to dig the Super Gas car. It’s a lot of fun to drive and once I get a few more runs under my belt I think I can win some races."

The Coughlin family has a long and storied history in the Super Gas class. Troy Coughlin Sr., won his first national event in Super Gas at the 1991 U.S. Nationals and a year later, Jeg Coughlin Jr. won the Super Gas national championship. John and Mike Coughlin, and even family patriarch Jeg Sr., have logged time in the popular 9.90-index class giving Troy Jr. a wealth of experience to draw from.

"When it comes to Super Gas, our family just about wrote the book on it," Troy Jr. said. "My dad and uncle Jeg have been especially helpful to me. Super Gas is a lot like Super Comp but there are a few things that are different. I’m hoping that I’ll be able to pick it up pretty quickly."

Coughlin will also be returning to the driver’s seat of his JEGS.com Super Comp dragster as he has elected to park his Top Dragster entry. Coughlin has enjoyed tremendous success in Super Comp including a pair of NHRA national event victories.

"Even though Super Comp is an extremely tough class, I feel competitive there," Coughlin said. "It’s also a bit of an advantage to race in Super Gas and Super Comp since they are similar. I think that racing these two cars will help to make me a better driver."