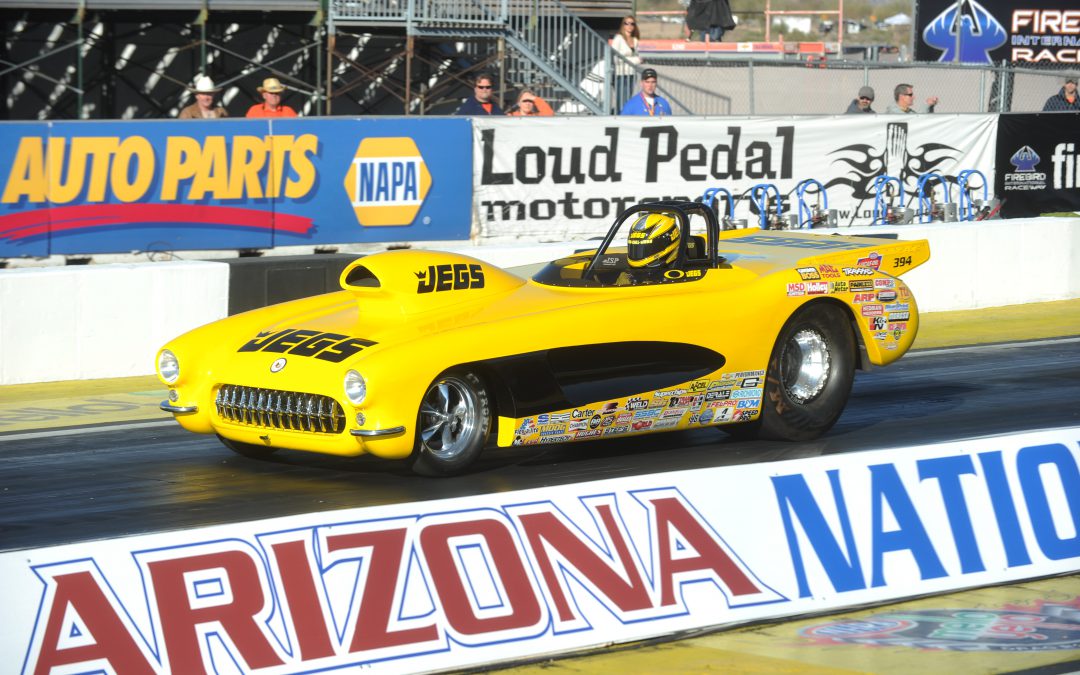 VALDOSTA, Ga. (March 7) – As he enters his fourth season of racing in the NHRA Lucas Oil Drag Racing Series, Troy Coughlin Jr. is more convinced than ever that he is ready to compete for a championship. To that end, the third-generation pro will begin that quest during this weekend’s Southeast Division event at South Georgia Motorsports Park in Valdosta, Ga.

Coughlin will have multiple chances for a victory behind the wheel of his JEGS.com Super Comp dragster and his JEGS.com '57 Corvette roadster Super Gas entry.

"I feel really good right now and I think it’s time to start turning on some win lights," Coughlin said. "This year, I’m going to focus a bit more on chasing points in Super Comp and Super Gas. My ultimate goal would be to finish in the top 10 in both classes. This weekend's race would be a great place to get the ball rolling."

Coughlin also will have the opportunity to pocket some extra cash as the event at South Georgia Motorsports Park is hosting a $10,000 Super Comp/Super Gas Combo event on Friday, followed by the NHRA Lucas Oil Series divisional event on Saturday and Sunday. Racing for only the second time this season, Coughlin welcomes the opportunity to get some extra seat time.

"This winter we got a new engine from Gary Stinnett for my dragster which should help us run a little more speed," Coughlin said. "It should run about 183 mph, which is about what all the good cars run. The Super Gas car is pretty much the same as last year but I’ve made enough runs now that I’m pretty comfortable in both of them."

In addition to their 93 combined NHRA national event titles, the Coughlin family also has assembled an impressive roster of 53 wins in the Lucas Oil divisional series. Family patriarch Jeg Coughlin Sr. collected 11 wins during his Hall of Fame driving career and his sons, John, Troy, Mike and Jeg Jr., have chipped in with an additional 42 titles.

Troy Jr., now 22, has accomplished a lot in his short time behind the wheel including a pair of NHRA national event titles and a host of E.T. bracket victories but the one title that has thus far eluded him is a victory in the NHRA Lucas Oil Drag Racing Series.

"This is something I’ve wanted ever since I started racing," Coughlin said. "I’ve learned so much from watching my family race and paying attention to all that they do. I’ve also got an awesome crew to work with including Jay Schroeder, Rick Rossiter, Greg Cody, Woody, and all the guys in our shop. I’m determined to do well this year as much for them as for myself."