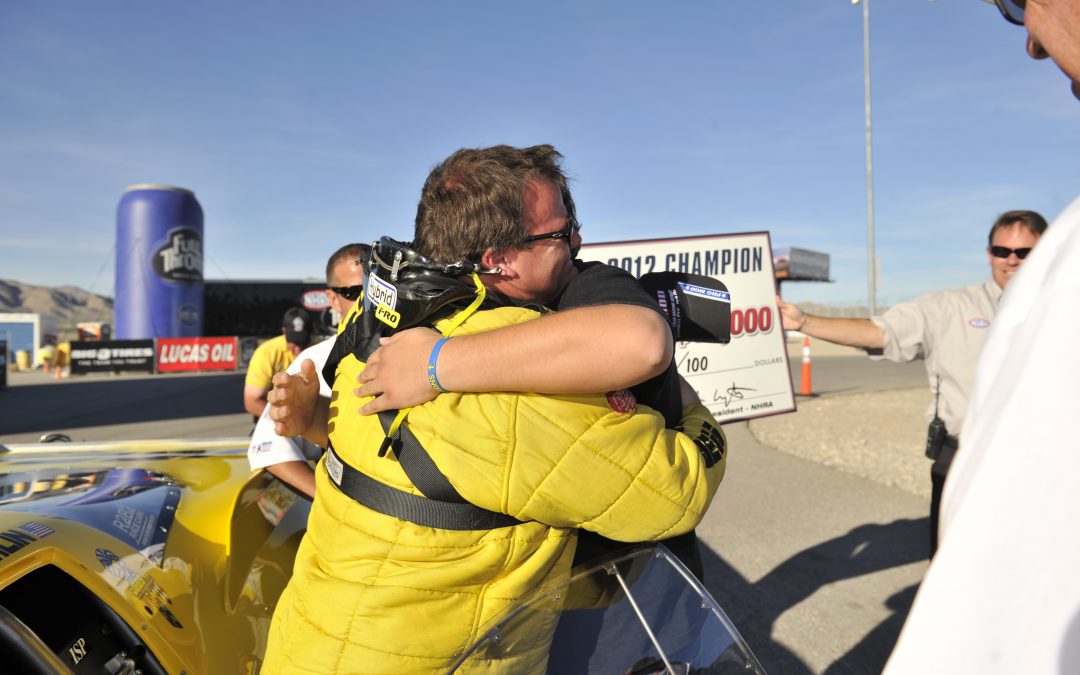 LAS VEGAS (NOV. 1) – If Troy Coughlin Jr. is looking for motivation for this weekend’s Lucas Oil Drag Racing series finale at The Strip at Las Vegas Motor Speedway, he need look no further than last weekend’s NHRA Big O Tires Nationals, where his father, Troy Sr., turned in an amazing performance to win the championship in the NHRA Pro Mod series presented by ProCare Rx. Debuting a new turbocharged Corvette at the Las Vegas event, Troy Sr. drove to his second-consecutive victory in the series, winning the title by a scant three points over Mike Castellana in one of the most dramatic finishes in the history of the class. Watching his father hoist the championship trophy on Sunday afternoon, and then collect a $50,000 bonus at the annual champion’s banquet, did nothing but inspire third-generation racer Troy Jr.

“That was, without a doubt, the coolest thing I’ve ever seen in my life,” said Troy Jr. “When the win light came on and my dad got out of the car and started to celebrate, I was in tears. Not just because he’s my dad, but also as a fan and a follower of the sport I don’t think I’ve ever seen a performance like that. Last week, I really learned what you can accomplish when you put together a team with the right people. I want to congratulate [crew chief] Steve Petty, Bryan Metzenheim, Nick Gaylord, Mike Rees, and everyone else that’s associated with that team for what they were able to accomplish. I believe they are the best group in the class. In the future, I want to be part of a winning team like that.”

This weekend, Coughlin will have a chance to add to the Coughlin family’s pristine record in Las Vegas that already includes seven wins as he once again tackles the Super Comp class in his JEGS.com dragster and Super Gas in his matching yellow and black JEGS.com Corvette roadster.

At last weekend’s Las Vegas event, Coughlin suffered a pair of tough losses. Steve Swenson, his round two opponent in Super Comp, won with a perfect .000 reaction time and in Super Gas, Troy lost a close second round battle against Steve Parsons. Coughlin, who claimed his first NHRA national event title at the 2009 fall Las Vegas event, knows there is room for improvement on both fronts.

“Last weekend was tough but we also made some progress with both cars,” said Coughlin. “Now we just need to take what we learned and apply it to this weekend’s event. I need to make good decisions in the driver’s seat and we need to apply the mathematics correctly so we can string together a few round wins. After what my father did last weekend I’ve never been more motivated than I am now. It would be a real dream to go out and win another race at this track. That would be awesome and that’s my goal.”