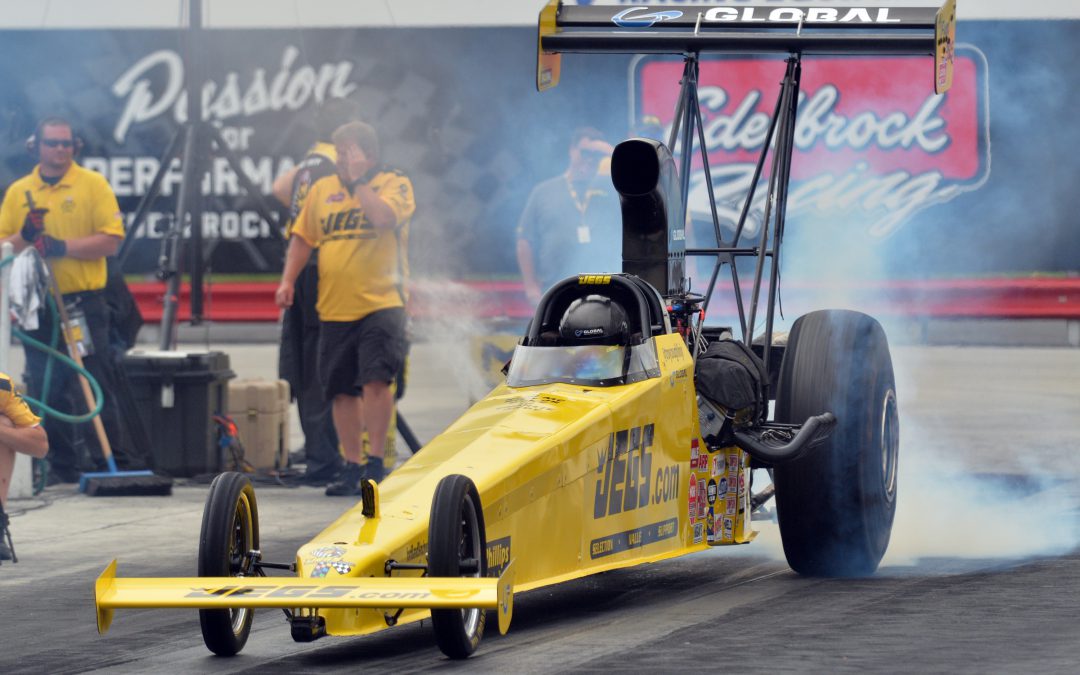 A winner at this facility one month ago during a divisional race, Troy Jr. almost repeated the feat but ultimately fell to Megan Meyer by a thousandth of a second. Troy Jr. was up for the race, peeling off a stellar .027-second reaction time, well ahead of Meyer's lazy .075-second start, but Meyer managed to make up the deficit and win with a 5.320 at 277.94 mph to Troy Jr.'s 5.369 at 275.67 mph. The margin of victory was six inches.

"I desperately wanted to win another race in my home state of Ohio," Troy Jr. said. "We got very close but credit to that Meyer team, they were strong all weekend. I wanted to do all I could to help my guys in the final and I'm pleased to have made a race out of it. I actually thought we had it won but she must have nipped us right at the line. Good race.

"Thank you so much to everyone here who gave us so much support all weekend long. The JEGS brand is strong here and we appreciate our loyal customers and fans. I also want to thank Steve and Samantha Bryson at Global Electronic Technology for their support. I'm humbled by the hard work put in by the crew at McPhillips Racing. I could not be on a better team. We'll get 'em, next time."

After running the quickest pass of the entire weekend in a first-round victory over Charlie Westcott, Pro Stock top qualifier Jeg Jr. appeared to be the man to beat in Norwalk. But just one round later, his JEGS.com/Elite Performance Chevrolet Camaro spun its tires at the launch, which put it way out of shape. Although he recovered quickly, the snafu was enough to give Elite teammate Enders a lead she never relinquished.

"Strictly judging by the seat of the pants feeling I got, the car felt a little too aggressive when I swapped feet and it just never recovered from there," Jeg Jr. said. "It tugged the motor back, popped the front-end way up, shook the tires when we got on the wheelie bars, which shot me the wrong way.

"I started grabbing gears trying to get it to settle because you never know what's happening in the other lane but obviously, Erica and the Elite/Melling Performance team laid down a real nice lap. She's going to be tough to beat today and we'll see if we can't cheer her on right into the winner's circle."

After winning the Pro Stock trophy three weeks ago in Chicago, taking the Super Comp title two weeks ago in Virginia and winning Pro Stock again last weekend in Bristol, Coughlin remains very optimistic about the next race in the schedule, despite his quarterfinal finish Sunday.

"I felt great about the team and the car today. We'll analyze everything and see what happened. We will certainly learn from it. This track is a new surface and we felt like we were on top of it after being low in qualifying and first round today. I guess that round just wasn't meant to be. We'll shake it off, learn, and move on."

Troy Coughlin Sr. lost in the opening round of Pro Mod. The three-time and reigning class champion got a great jump on Rick Hord but his parachutes prematurely deployed just after the start, causing him to slow and lose the race.

After four straight weekends of racing, the Mello Yello NHRA Series takes a weekend off before returning to action July 6-8 in Epping, N.H.