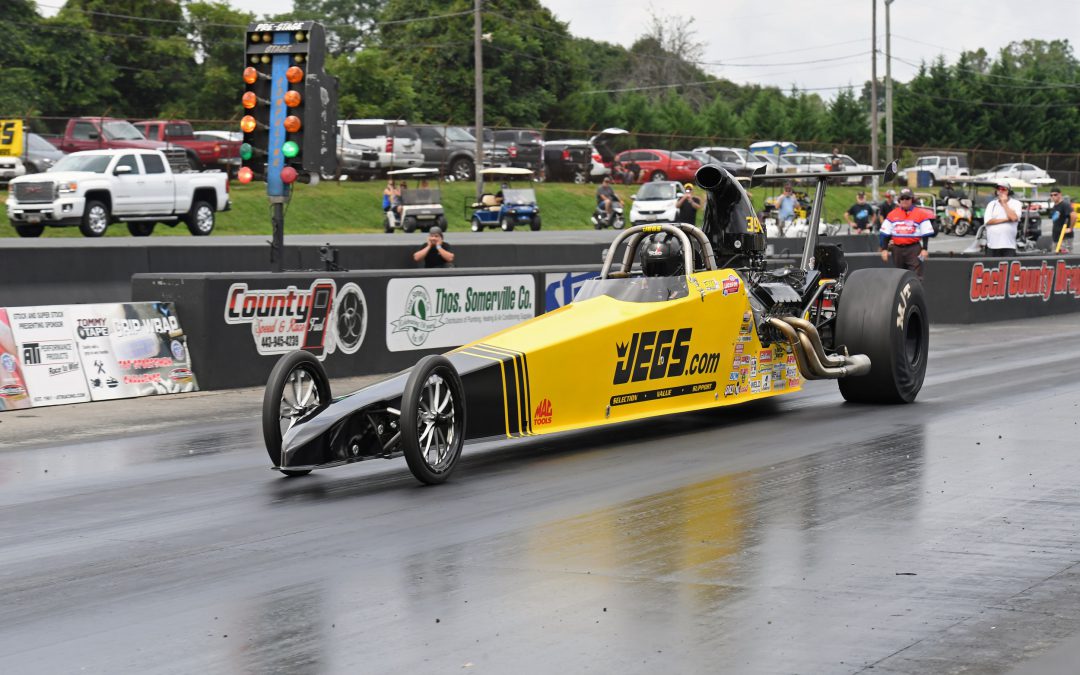 DELAWARE, Ohio (Aug. 18) — Troy Coughlin Jr. raced his JEGS.com bracket dragster to a semifinal finish in the Top Dragster category at this weekend's Northeast Shootout at Cecil County Dragway. The finish was the best of the three Team JEGS drivers in competition, with Jeg Coughlin Jr. bowing out in the second round of Pro Stock in Brainerd, Minn., and Troy Jr.'s sister Paige exiting in the first round of Super Comp at Cecil County.

The fifth of seven races on the Division 1 schedule, the Northeast Shootout didn't feature Top Alcohol Dragster, allowing Troy Jr. to swap his JEGS.com McPhillips Racing rail out in favor of his trusty bracket hot rod. His mail goal was to help Paige, but when she lost earlier than expected, Troy Jr. was able to concentrate solely on his endeavors.

"I had a blast this weekend," Coughlin said. "I've raced Top Dragster before but this is the first time the class this year. I think what made it so fun was the fact I wasn't up here racing for points, it was all about enjoying myself.

"It was great to go four rounds and if not for a red-light, I may have made it to the finals. What was even better was remembering to always have fun. When you're able to just relax, smile and enjoy yourself 100-percent, you don't even think about pressure. Everything comes naturally and your body just reacts and does what it does without you even thinking about it."

Troy Jr. currently is ranked third overall in national points for Top Alcohol Dragster and is second in the East Region standings. Sister Paige usually races in Division 3, where she is ranked fourth overall. She's also leading the way in JEGS Allstars points in her class.

Both Troy Jr. and Paige will race again next weekend at the Battle at the Beech in Bowling Green, Kentucky. Troy will be back in his Top Alcohol Dragster and also will compete in Super Comp, while Paige will remain in Super Comp.

After qualifying fifth overall at the 32nd annual Lucas Oil NHRA Nationals at Brainerd International Raceway, Jeg Jr. looked sporty in a first-round defeat of Kenny Delco Sunday morning. He launched his JEGS.com Elite Motorsports Chevrolet Camaro first by .029 seconds and never looked back, crossing ahead of Delco with his best pass of the meet — 6.596 at 206.51 mph to Delco's 6.612 at 208.36 mph.

Entering Round 2 with lane choice over Derek Kramer, Jeg Jr. and his JEGS.com Elite Motorsports Chevrolet Camaro teammates were expecting more of the same, but a slight trip-up at the start resulted in a close loss, with Jeg Jr.'s 6.610 at 206.48 mph not quite enough to beat Kramer's 6.599 at 208.65 mph.

"We had a good run in Round 1 and really didn't feel the need to change anything for the quarterfinals," Jeg Jr. said. "But we just didn't quite have it that round. The car kind of chugged through first gear and felt sluggish so I grabbed second as quickly as I could and it ran really well from that point on. Unfortunately, that little bog at the start cost us our chance."