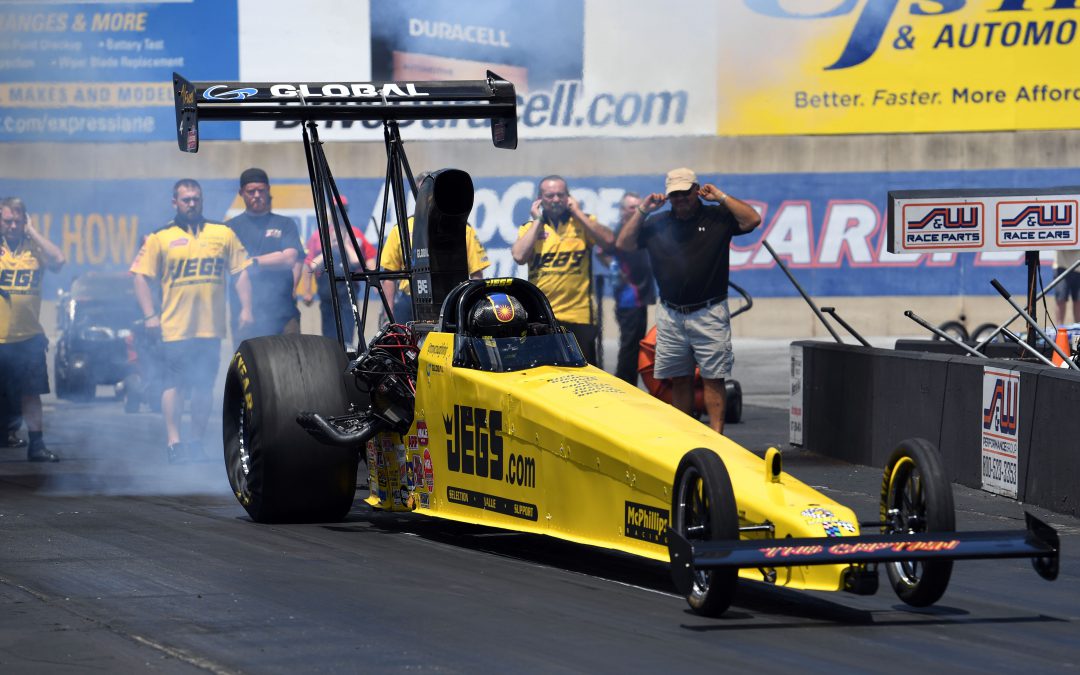 READING, Pa. (May 26) — Troy Coughlin Jr. began his first-ever Division 1 championship charge with a strong runner-up finish that, combined with a No. 1 qualifying effort, let the rest of the "Land of NED" know the JEGS.com McPhillips Racing Top Alcohol Dragster will be a force all season.

After running a stout 5.186-second pass at 278.98 mph in qualifying, Coughlin led the field into race day as the favorite to win it all. He then beat Brandon Greco and Jeff Veale in the first two rounds before losing on a holeshot to past world champion and defending event titlist Duane Shields.

"Rich and Richie (McPhillips) and the entire team had the car textbook perfect all weekend," Coughlin said. "We should have won the race. I just missed the tree in the final, plain and simple.

"I need to get faster with my reaction times. I obviously need to put in more work. I'm consistent but I need to pick up .015 to .020 seconds, that's the bottom line. Even the two rounds I won would have been better if I'd had better lights."

As it turned out, reaction times didn't matter in the semifinals as Veale, who had upset Tom Fox Jr. in Round 1, jumped the start by -.015 seconds and was disqualified. Coughlin, who had a .066-second light, went on to post a 5.216 at 277.89 mph to easily earn lane choice over Shields in the trophy round.

"It's a great take away for me from this weekend to know exactly what I need to work on to be better," Coughlin said. "I will continue to hit my practice tree and keep pushing myself on every opportunity I have to get better on the starting line."

Up next for Coughlin and his McPhillips Racing teammates is the 22nd annual Route 66 NHRA Nationals, which begins Friday near Chicago. The national event features the JEGS Allstars, a special race-within-a-race highlighting the best sportsman racers from each of the NHRA's seven geographical divisions. Even though Coughlin didn't qualify for this year's Allstars after splitting his time between divisions in 2018, the significance of the race still resonates with the six-time national event winner.

"It's the best of the best racing for their home division," Coughlin said. "For Sportsman racers, there's nothing more prestigious. I can't wait to cheer on all my friends and see our JEGS logo everywhere.

"We'll be trying to win the national event. Our dragster couldn't be running any better. It's just incredible right now. I need to be doubt free and focused on getting off the starting line on time and we should have another big weekend."