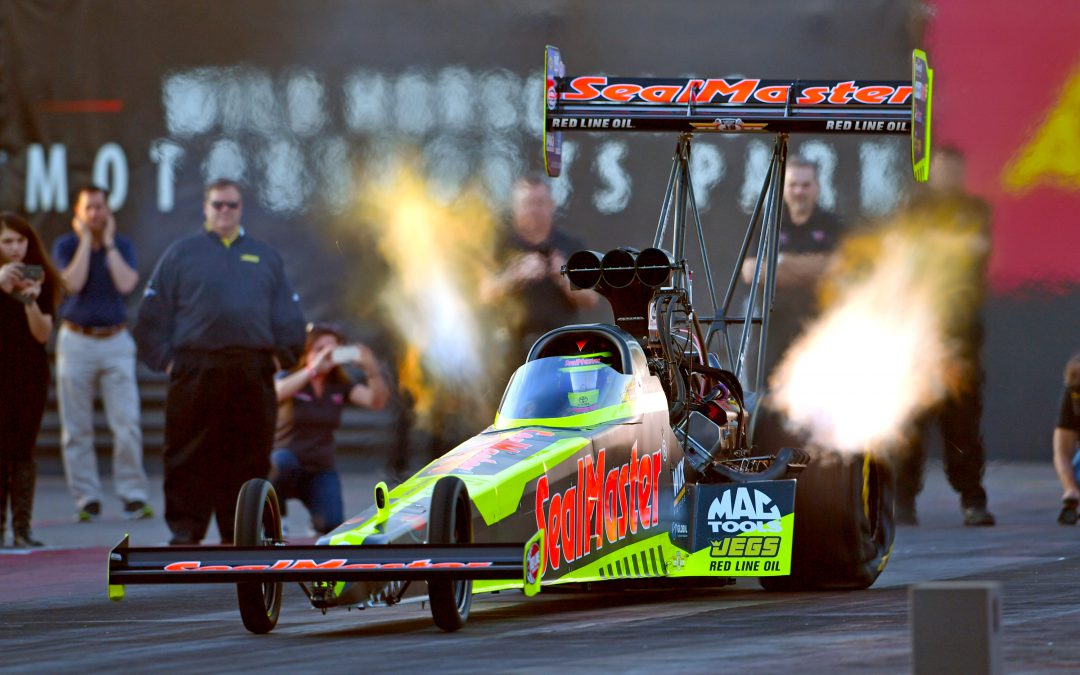 POMONA, Calif. (Feb. 6) — Troy Coughlin Jr. is ready for the ultimate test of his drag racing skills with his first national event in a Top Fuel dragster at this weekend's 57th annual Circle K NHRA Winternationals at Auto Club Raceway in Pomona. The third-generation driver has succeeded in every class he's raced, but even he admits the challenges of piloting the 10,000-horsepower SealMaster rail are daunting.

"I'm completely humbled," Coughlin said after three days of testing in the Arizona desert. "It's just so fast. Everything comes at you so quickly in the seat. It's much more intense than I ever imagined. This is one aggressive racecar, and it never stops accelerating during the run. It's a beast, and it's also very, very cool."

Coughlin and his Kalitta Motorsports teammates, led by crew chiefs Rob Flynn and Connie Kalitta, made 13 test runs at Wild Horse Pass Motorsports Park with a best of 3.763 at 317.42 mph.

"Up until now, the quickest car I had driven was my Pro Mod Corvette and even though that was a handful to drive I picked it up fairly quickly," Coughlin said. "I think the difference in taking on that challenge was that I had been around my dad's team for a couple years, watching everything they do in preparing the car and what my dad did in the driver's seat.

"We really didn't get serious about going Top Fuel racing until the latter part of last year so I've had maybe six months to soak up as much as possible. I feel like I'm way behind. Plus, every other car I've driven I felt comfortable in it by the third or fourth run. This thing will take me 40-50 runs 'til I'm even close to feeling somewhat in control."

He'll get more chances to hone his skills during Top Fuel qualifying, with four sessions scheduled for 1 and 4 p.m. PT, Friday and Saturday. If all goes well, Coughlin also will be part of eliminations, which start at 11 a.m. PT, Sunday.

"I just want to do the best I can and help the crew guys as much as possible," Coughlin said. "They've been so cool to me, very supportive and positive. And I can say I really enjoy watching these guys work. It was funny because they came into the test saying, 'Welcome to Hell Week.' I thought it was a joke but watching what they do to prepare this SealMaster/Toyota dragster for a run is crazy. No wonder they are so worn out.

"Pomona is a historic race and the best thing I can do is limit my rookie mistakes. To say I'm excited doesn't come close to describing how I feel. This is all dream-come-true stuff for me and I'm going to enjoy every moment."