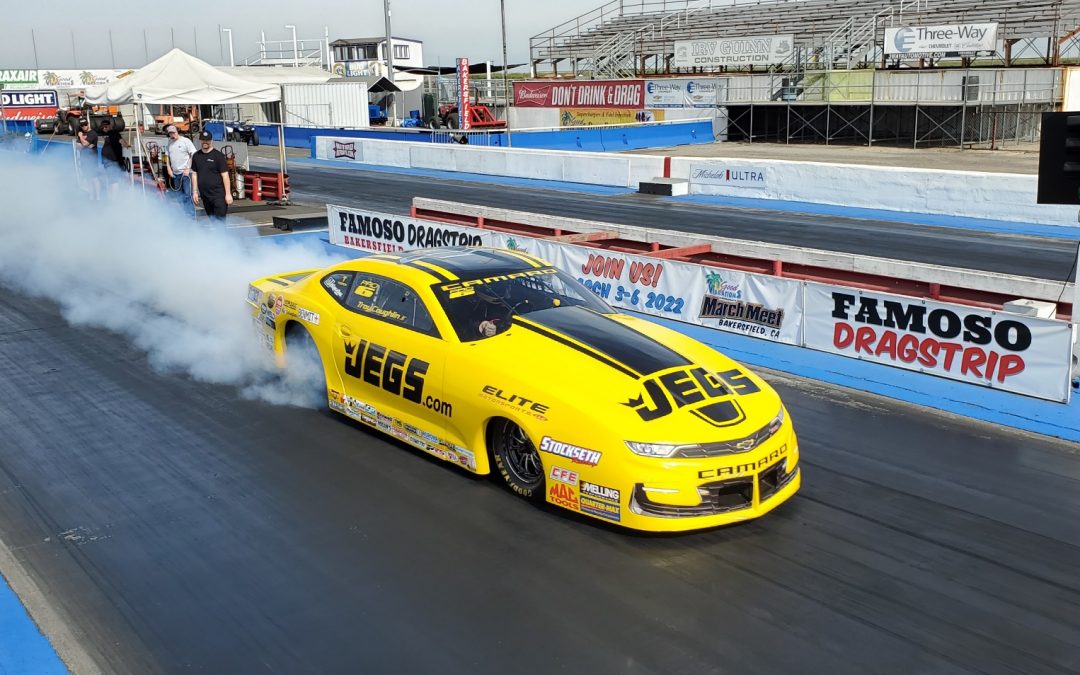 Troy Coughlin Jr is ready for the 2022 NHRA season

“There’s no real secret to it,” the third-generation professional said. “We have to run at the top level, every member of the team needs to stay focused, and we need to be persistent and consistent every race weekend. That’s all. You want to put yourself in the best position possible to have a chance at the end of the season.

“We want to set a routine, starting right now at this weekend’s race, where we create a winning attitude with a winning car. As a driver, I need to be as competitive as I can be without being too emotional. There’s a long season ahead and there will be lots of twists and turns. It’s up to me to find the right path and try to be at my best at all times.”

New look for the JEGS.com / Elite Motorsports for 2022

Troy Jr. had some magical moments in 2021 in the JEGS.com Elite Motorsports Chevrolet Camaro. He raced to the final round in Gainesville, Fla., was one of the finalists at the 4-Wide Nationals in Charlotte, qualified No. 1 in Topeka, Kan., and pro-longed the championship chase to the last race with a late-season, Round 1 upset of Greg Anderson at the penultimate race in Las Vegas.

“We can write our own story, just like last year,” Troy Jr. said. “With crew chief Mark Ingersoll leading us, Kyle Bates (car chief/co-engine builder) at his side, Ricky Calloway on the clutch, and Kelly Murphy working the back-half, I have a ton of confidence in our capabilities. We’re ready to get it all started and have some fun.”

Like his nephew Troy Jr., Mike Coughlin is always ready to go fast and that will never be clearer than this season with the three-time divisional champion embarking on his first season in Top Alcohol Dragster. Behind only the nitro-powered categories of Top Fuel and Funny Car, Top Alcohol entries are capable of posting runs of 5.090 seconds at 285.83 mph.

“We’ll be going quicker and faster than ever before,” Mike said. “I’m as excited as I’ve ever been at the start of a season. To be kicking it all off in Pomona at the Winternationals makes it all the better. I’m ready to get started.”

Mike will be piloting the championship-contending JEGS.com Top Alcohol Dragster of McPhillips Racing, a group which helped Troy Jr. win back-to-back regional championships and 10 wins in 2018 and 2019. Mike made just one start in the nitro-injected rail towards the end of last season but it provided enough of a thrill to convince him to go for the world title this year.

“I had the chance to try it out at the second Vegas race and then the team came to Pomona and won the NHRA Finals with Rich (McPhillips) Jr. in the driver’s seat, which really helped seal the deal. These guys know what they’re doing and we’re starting 2022 with a good bit of confidence.

McPhillips racing is no stranger to racing with the Coughlin family

“Without question, this is a top-notch team. I don’t know if I’ve seen a more professional group at any level of racing. (Car owner and crew chief) Rich McPhillips, his son Rich Jr., and the rest of the crew are incredible to watch in action. It’s no wonder they win so much. Hopefully I won’t slow us down too much.”

A full slate of regional and national events are on tap for the team, with Mike claiming Division 3, the same place where he captured the 2007 and 2009 Top Sportsman crowns, as well as the 2019 Top Dragster title.