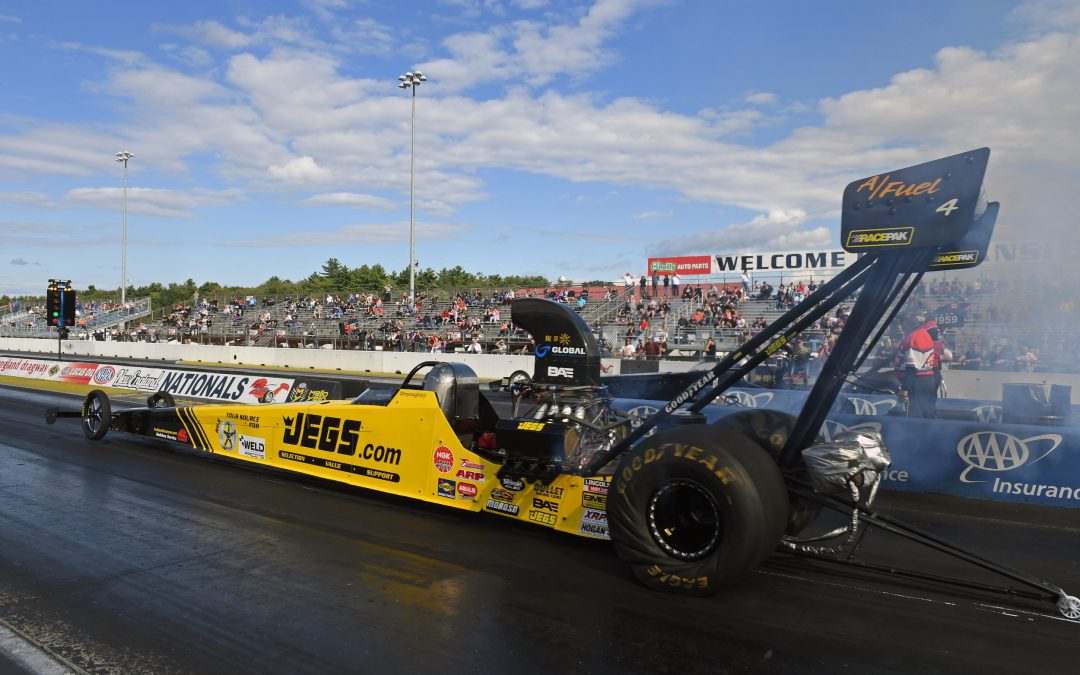 “This is such a humbling sport,” Coughlin said. “We’ve been running so well and we were very confident heading into what was obviously a big round for us and the car spun the tires. I mean we didn’t go an inch. That hasn’t happened all year and that was a bad time for it to happen but we’re not gonna dwell on it. We’re already looking forward to next weekend.”

Due to rain that followed the semifinal round, Coughlin won’t know how much damage he incurred in the rankings until today. Hart is scheduled to race Dan Mercier for the trophy once the weather clears. Mercier upset top qualifier Duane Shields to earn his chance at glory.

“You go up there and do your best every round, that’s all you can do,” said Coughlin, who beat Richard St. Pierre 5.21 to 5.43 in Round 1. “Rich (McPhillips, car owner and crew chief) will figure out what happened and make the necessary adjustments.

“We have more racing to do and we’ll just need to be perfect to make up for today. There is no team in the world I would rather be with than this one and I think we’re all glad to be racing again next weekend in Reading.”

Last year, Coughlin piloted his JEGS.com McPhillips Racing hot rod to the win at the annual Mopar Express Lanes NHRA Nationals at Maple Grove Raceway in Reading, Pa.  It is the home track for McPhillips Racing, which is based in nearby Phoenixville, Pa.

While Troy Jr. was racing in New Hampshire, his uncle Mike Coughlin, one of four brothers who own and operate JEGS High Performance, was in Norwalk, Ohio, making up for a rainout earlier this year. Like Troy Jr., Mike didn’t have his best weekend, eliminating himself in the second round of Top Dragster with to a minuscule -.001 second red-light start.

Mike has previously beaten veteran Tom Martino in Round 1, when Martino ran -.005 seconds under his index.