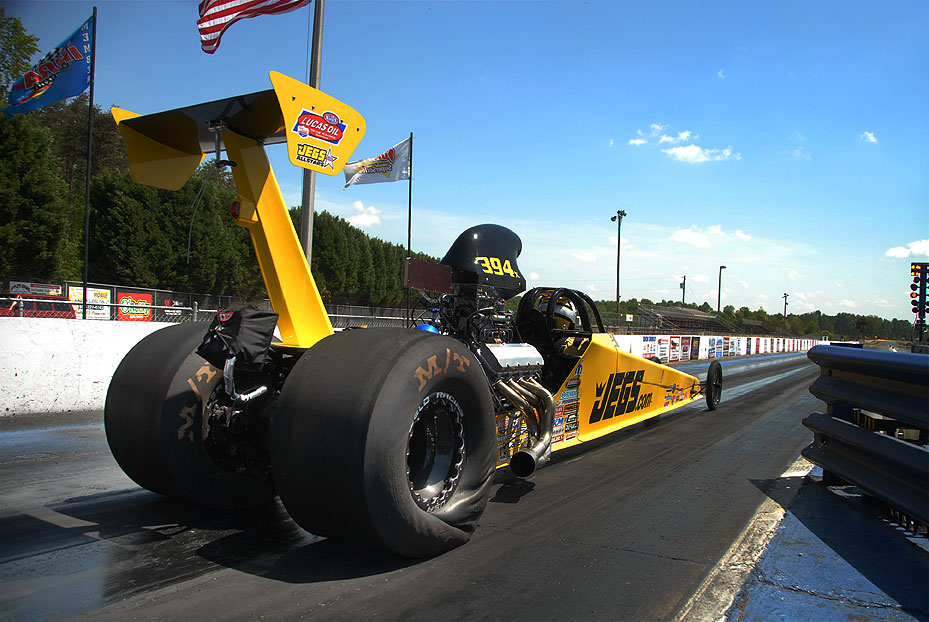 JULIAN, N.C. (April 15) – It was another successful weekend for the JEGS Mail Order team as third-generation racer Troy Coughlin Jr. claimed a victory during the annual $50,000 Top Eliminator Classic at Piedmont Dragway.

During Friday night’s opening event, Coughlin picked up the $5,000 first-place prize after driving his JEGS Mail Order dragster to a final-round win over "Disco Dean" Karnes. Coughlin was almost perfect in the final as he left the starting line with a .000 reaction time and ran within .005 seconds of his dial-in number. Karnes was strong as well, with a combined elapsed time that was just .008 seconds from perfect.

"That might have been one of the best final rounds I’ve ever been in," Coughlin said. "I made a great run and I needed all of it to get the win. Dean is a great racer and he lives in Fairborn [Ohio] which isn’t far from us. It was a great weekend for us 'Ohio boys.'"

During the event, Coughlin took advantage of a rare rule that allows a competitor to enter the same car twice using two different competition numbers. Coughlin "double-entered" the event Friday and advanced to the late rounds with both entries. He ultimately found himself in the unique position of having to race against himself in the quarterfinals. Coughlin was forced to surrender one of his entries but he went on to win the event with the other.

During Saturday's $20,000 main event, Coughlin posted a second- and third-round finish with his two entries and during Sunday’s $10,000-to-win finale; he advanced to the fourth and fifth rounds of eliminations.

"We put a lot of runs on that dragster this weekend," Coughlin said. "I think we even had to change the oil once. At one point I won 19-straight rounds and you just can’t put a price tag on that kind of seat time. You learn so much when you get to race that many times in a weekend."

Helping Coughlin keep up with the hectic pace of the event was crew chief Jay Schroeder and longtime friend and fellow racer Kenny Underwood, who also posted a couple of late-round finishes during the event.

"Jay and Kenny are so smart; they not only helped me maintain the car and pick a dial-in, but they also planned our strategy perfectly," Coughlin said. "It all comes down to confidence and I had confidence in myself and in my car and that made it easy to race. I owe Jay and Kenny a big thank you, and also my uncle Jeg for letting me use his dragster. The same goes for all the guys back in the shop and all of our associates at JEGS Mail Order. We couldn’t do this without them."