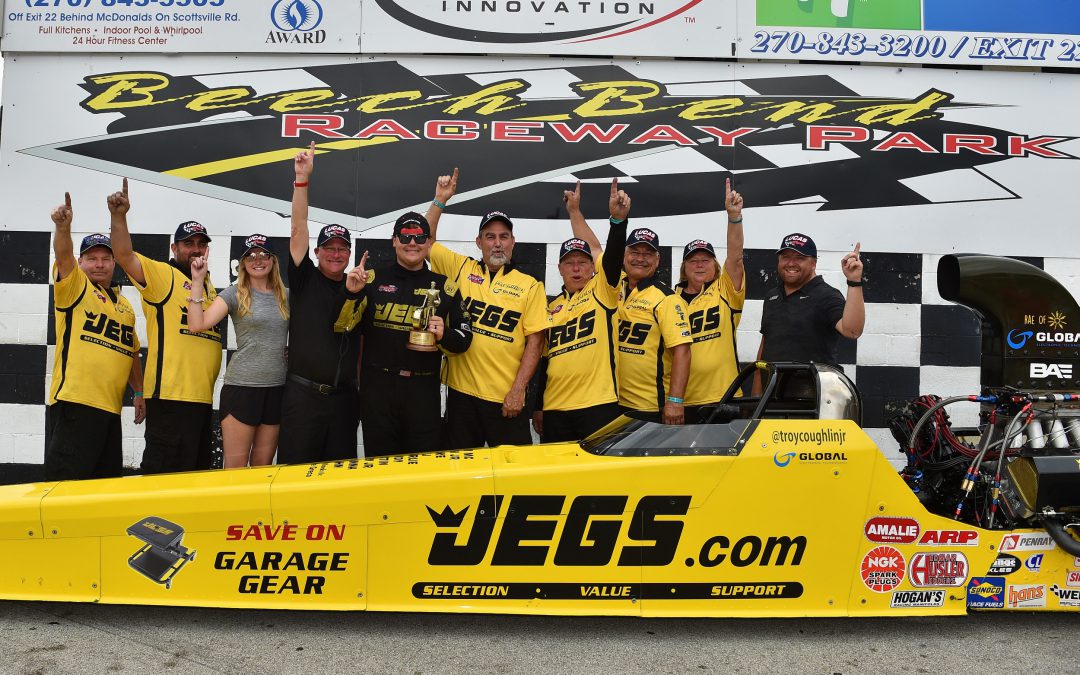 His sister Paige, who races in Super Comp, also had a big weekend, gaining plenty of points on the three men who started the weekend ahead of her in the North Central Division points.

But this weekend the main spotlight was on Troy Jr., who celebrated his third victory in the last two months. He recently claimed wins at the national event in Norwalk, Ohio, and the D1 race in Atco, N.J. Overall, Troy Jr. has now raced to seven final rounds this year in his JEGS.com McPhillips Racing dragster.

"It's not me," Troy Jr. said. "It takes these incredible people from McP Racing. Rich and Richie (McPhillips), Duke Roney, John Flenard, Andy Goode, Charlie Wroten and Charlie Greco; they make me look good. They're fast, they're smart and they are solid professionals who win. They save my butt all the time.

"Rich has this car hopped up. He's being aggressive and we're running it on the ragged edge, but that's what you need to do this time of the year if you want to achieve your goals. Everything's working for us right now but we know this sport can be very humbling so we will take nothing for granted, stay in the groove we're in, and keep adapting to whatever these races throw at us."

His work wasn't done though as had to get past two more top-10 runners in Chris Demke with a 5.23 and top qualifier Julie Nataas with a 5.22 to secure the trophy.

"I hope we can keep it up because we'll be chasing a little bit of personal history next week in Indy," Troy Jr. said. "In 1991, my dad won Bowling Green in Super Comp and then drove over to Indy and won Super Gas in the same car. I was only a baby but I've heard the stories all my life. I'd love to win both races again in his honor."

She also beat her brother Troy Jr., Jessica Bogacki and Phillip Oakley on a double-breakout to reach the fifth round, where she was nipped by Sherman Adcock by .011 seconds.

"We had some great round wins," Paige said. "For sure we will move up in the points because Luke (Bogacki) went out in Round 2 and he was just ahead of us in third. Jeremy was only 12 points ahead of us in third so I think we'll be second or maybe even first. Rick Hughes (points leader) lost in Round 1 so he wasn't able to claim points.

"It's really exciting, especially since there's only one D3 race left to decide the championship. It looks like we'll have a group of us all within reach of the title heading into that weekend. With continued help from my brother and (crew chief) Justin Beaver, we'll definitely have a chance."

Another racer that will be taking a look at the points when they come out in the next few days will be Mike Coughlin, Troy Jr. and Paige's uncle. Mike led the D3 points in Top Dragster at the start of the weekend but suffered an untimely first-round loss when he broke out by -.004 against Ryan Koener.

"We were just in the wrong place at the wrong time and lost a really close one there," Mike said. "We're still happy. I haven't done the math yet but we'll be in good shape to try to win another D3 championship at the final in St. Louis. We had a bit of a cushion coming in so we'll still be in the mix.

"My JEGS dragster continues to run great. Greg Cody, Tony Collier and Dave Raurk put a fresh Fowler blower on it this weekend and it ran worked exactly the same as the other one. We wanted more from this weekend but we'll go on to the next one and see if we can't finish this season out with the title."