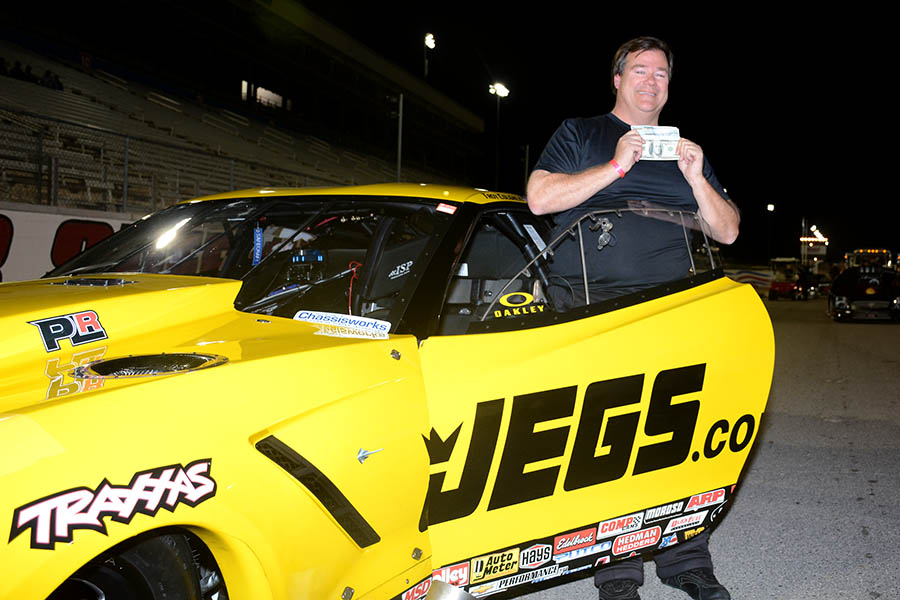 LAS VEGAS—When Troy Coughlin is behind the wheel of his 2015 JEGS.com Corvette, people take notice.

That was the case Thursday night at The Strip at Las Vegas Motor Speedway when the newly-crowned two-time NHRA Pro Mod champion rolled into the lane for the Turbo Smart/Bangshift.com Pro Mod Shootout. The event kicks off the JEGS.com Street Car Super Nationals Presented by Chris Alston’s Chassisworks and provides fans and fellow racers with a barometer of who to watch in the Pro Mod classes over the course of the event.

Coughlin, also a two-time SCSN champion, came out blazing, laying down a pass of 5.686 seconds at 268.38 mph. The Shootout is a no-holds-barred round run in Outlaw format and the Delaware, Ohio native's lap was nearly .2 seconds ahead of No. 2 qualifier Andrew Berry and his 5.852 second/257.33 mph run.

This weekend represents the 11th running of the annual record-shattering pre-Thanksgiving tradition and is the biggest so far with more than 420 cars entered and more racers continuing to arrive. Mel Roth, SCSN promoter and president of the Premier Street Car Association, said the weekend could be one of the most memorable race of an event that has seen records fall every year.

“Every year, we think ‘This can’t get bigger and faster than last year,’ and every year, it gets bigger and faster,” Roth said. “We’re very thankful for all the drivers who show up from literally all over the world to participate, for our sponsors who have supported us from the beginning, and for the fans who come out here for the first pass of the day and don’t leave until the last car crosses the finish line.”

For those who can’t make the trip to Vegas, Bangshift.com is once again providing a live, free web stream of the entire weekend.

For more information on the JEGS.com Street Car Super Nationals 11 including the full schedule, visit StreetCarSuperNationals.com and the official page on Facebook at Facebook.com/StreetCarSuperNationals. Fans are also encouraged to follow the action on Twitter and Periscope at @PSCARacing using the hashtag #SCSN.