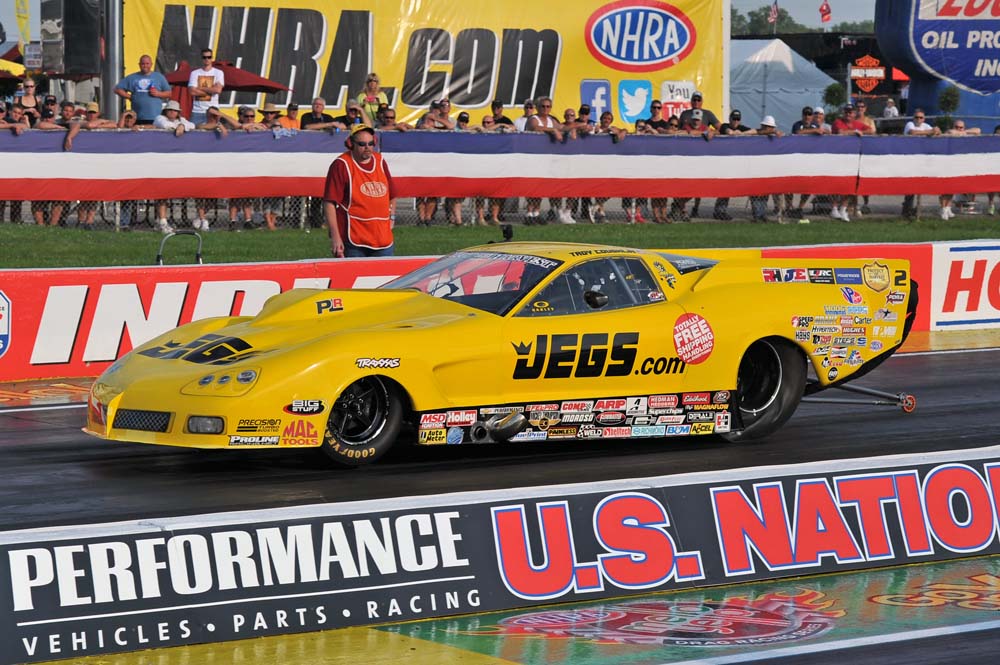 INDIANAPOLIS (Aug. 29) – Team JEGS had an outstanding first day at the U.S. Nationals on Friday at Lucas Oil Raceway.

"We had a helluva first day when you look at all the teams," said Jeg Coughlin, the U.S. Nationals champion in Pro Stock in 2000, 2002 and 2009 and in Super Gas in 1992. "Troy going to the pole in Pro Mod was exciting, and Troy Jr. getting a couple first-round wins was great."

"It's been a pretty good day," Coughlin said. "Jeggie's qualified in the middle of the pack, we ended up No. 1 and T.J.'s won in Super Comp and Super Gas first round. Pretty good day for JEGS.com."

Coughlin's turbocharged Corvette sped down Lucas Oil Raceway with a pass of 5.945 seconds at 248.75 mph to lead 31 Pro Mod cars who made qualifying passes Friday.

"We've been testing a lot, and it's been running pretty good," Coughlin said. "(Crew chief) Steve (Petty) is just a mastermind at what he's doing. As long as we don't make any mistakes, man, it'll run pretty good."

His son T.J., coming off a Division 3 Super Gas victory at Cecil County two weeks ago, got past what is perhaps the most difficult round in the Sportsman classes.

In his Super Gas roadster, Coughlin had an .025-second reaction time and ran under his 9.90-second index but was able to advance.

"I didn't quite get it all," Coughlin said. "We'll come back a little bit more up on the wheel. First round is always the toughest. Tomorrow will be similar, but with a round under your belt in competition, it's a little easier mentally."

Coughlin races Diana Anderson in the second round of Super Gas.

"We had a good execution in the dragster," Coughlin said. "We had a good run, close to our index. We're on a high note on that one, for sure."

Coughlin faces Marion Stephenson in the second round of Super Comp.

"We're 10th, so obviously there are nine cars happier," Coughlin said. "We'll work hard tonight to see if we can figure out where the elapsed time is. I'm not too concerned. We’ve got a great computer system on the car, and we all know how to read it, and we've got a great team. We'll look to improve and get ourselves in a better position tomorrow. We'd love to run well in Q2 tomorrow and get set up for Q3 and the semifinals of Brainerd."

The Brainerd race was postponed after two rounds because of rain. On Saturday at Indy, Q3 will also serve as the Brainerd semifinals. Coughlin lines up against Vincent Nobile in the semifinal race.