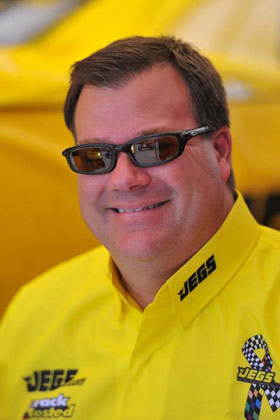 NORWALK, Ohio (July 3) – For Troy Coughlin, racing in his home state of Ohio is always a celebratory experience, and with the way his turbocharged JEGS.com Chevy Camaro has been running of late in the NHRA Pro Mod Series presented by ProCare Rx, this weekend’s NHRA Nationals might be about more than mere civic pride.

Over the course of the past few races, Coughlin has seen the chemistry on his team come together and the performance on his Team JEGS ride has followed suit. It all could add up to a victory party on Sunday.

“We have done real well at the last couple of races,” Coughlin said. “We have a race car that is competitive and car to be beat. I know everybody on the team is giving 110 percent for sure. Just trying to put the whole package together and make it happen.”

Coughlin is sixth in the Pro Mod standings, but is only five points out of the No. 4 spot. Coughlin said quality results not only come from quality parts and pieces, but also the right people in the right spot.

“I have worked with the guys on my team for a while now,” Coughlin said. “I hired Nick Gaylord a couple of years ago. Brian Metzenheim and Mike Rees have known me for eight or nine years. They are a good group of guys.

“We hired (tuner) Steve Petty this year to put the final pieces of the puzzle together. Now we have a competitive team and an opportunity to win a race. If we all do our jobs, we really should be a top two player.”

Win or lose this weekend, Coughlin expects to have a good time racing in the Bader family’s back yard.

“It is a great facility, and it is a full house all the time,” Coughlin said. “They do a wonderful job. They treat the racers right.

“I know there are a ton of the people we work with at JEGS going,” It will be cool to have all 350-plus associates from work cheering us on, so it should be a fun time.”

Pro Mod qualifying gets under way Friday with two qualifying sessions starting at 3:40 p.m. EDT. Qualifying concludes at 10:30 a.m. Saturday with the first round of eliminations later in the afternoon. Eliminations will conclude Sunday afternoon.