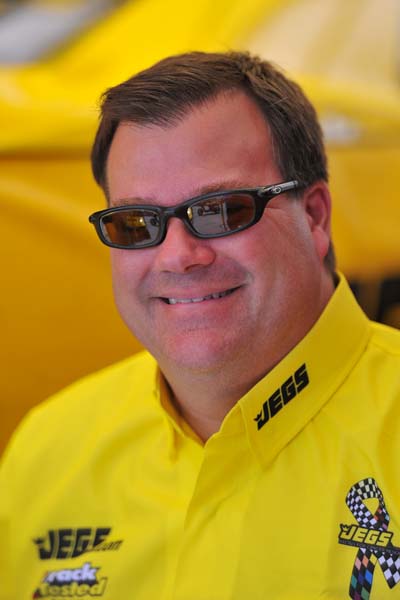 NORWALK, Ohio (July 8) — For the second time in the last three races, Troy Coughlin raced his twin-turbocharged JEGS.com Camaro to a runner-up finish in the NHRA Pro Mod Series presented by ProCare Rx.

Following a strong, second-place showing in Englishtown, N.J., last month, Coughlin returned to top form in his native Ohio this weekend, qualifying No. 1 and mowing down Mike Knowles, Donald Martin and Roger Burgess before bowing to Donnie Walsh in the money round at the NHRA Nationals in Norwalk.

“We’ve got a good race car,” said Coughlin, a past NMCA world champion. “We started the weekend hoping to move up in the points and win some rounds, and we did that. With some of the issues we had with the car through qualifying, to put it on the pole after the last qualifying attempt in the heat was impressive. Then we turn around and have a great raceday. I couldn’t be happier.”

Coughlin and crew couldn’t get down the track Friday but jumped from out of the field to the top qualifying spot Saturday morning with an impressive 5.949 at 250.64 mph.

Temperatures cooled a bit overnight and everyone was quicker Sunday, including Coughlin, who posted two more 5.9s en route to the final round. With the trophy on the line, Coughlin’s car simply overpowered the track and he could only watch as Walsh sped away for a 5.893-second, 251.95-mph win.

“We made some good consistent runs through eliminations and got into the final,” Coughlin said. “It was a good race against Donnie, and we knew it was going to be a good race. We just tried to get after it a little bit too much. Between that and the race track starting to come down in temperature a skosh, we overdid it.

The Pro Mod tour is off until Aug. 29-Sept. 3 when the 58th annual Mac Tools U.S. Nationals pres. by Lucas Oil roar to life in Indianapolis.

“Our time is coming soon,” said Coughlin, who moved up one spot to fifth Sunday. “This is a championship-caliber team with good backing from JEGS.com. It’s strong. We’ve got a great car and we’ve got another car coming that’s probably going to be a little bit meaner than this one. We’re going to work over the summer break on power and try to come out swinging in Indy.”