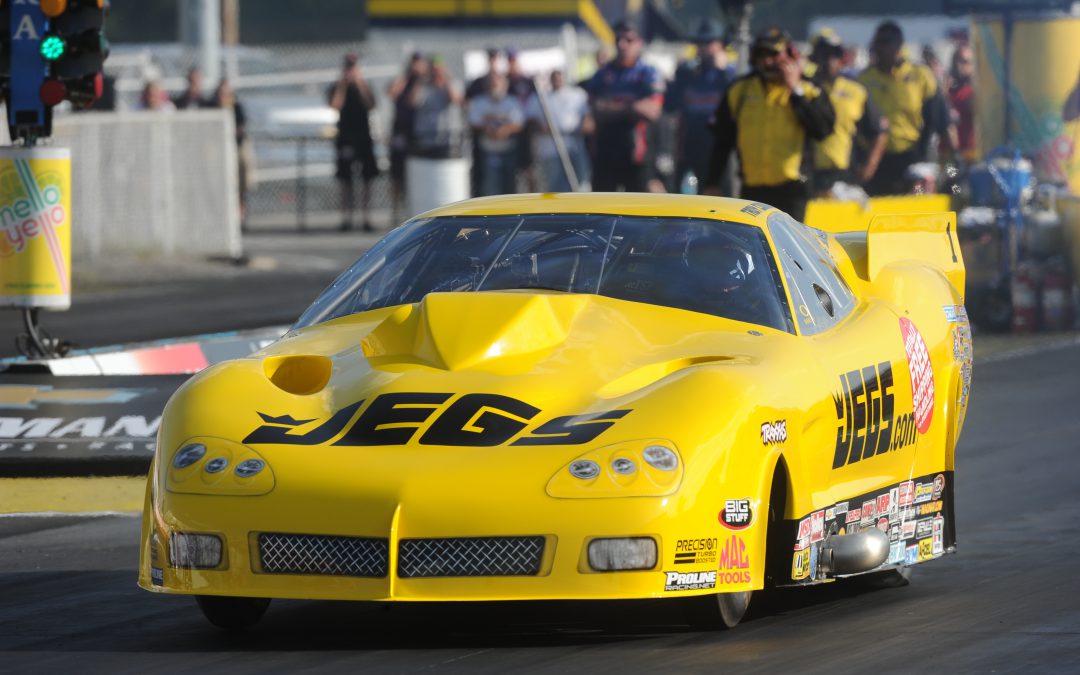 INDIANAPOLIS (Sept. 2) – JEGS.com Pro Mod driver Troy Coughlin's 2013 season has been hot or cold, as he's reached three final rounds – winning once – while falling in the first round three times.

But the U.S. Nationals on Monday at Lucas Oil Raceway were lukewarm, as Coughlin raced to the semifinals before dropping a fierce race to Rickie Smith.

"It's definitely good," Coughlin said. "It's nice to get past the first round and go some rounds. The JEGS.com car is running pretty damn good."

Coughlin, crew chief Steve Petty and the team stepped up when they needed to in Indy, posting their best elapsed time in eliminations. Coughlin, the No. 12 qualifier, beat Tim Tindle in the first round on Sunday with a pass of 5.977 seconds at 244.43 mph.

That put him up against Kevin Fiscus for Round 2 on Monday, and though the turbocharged Corvette didn't make a perfect run, it was more than good enough. Coughlin's pass was 6.043 seconds at 243.63 and took down Fiscus' 6.218-second run at 240.08 mph.

"We put a conservative, 5.97-, 5.98-type of a tune-up in it," said Coughlin, who remained second in the points standings. "It got a little bit loose probably 300 feet or so and started skating toward the centerline a little bit. We backed it down just a little bit to try to get it back in the groove so we could stand on it again. It ran 6.04, 243, and I was like, 'Wow, it's definitely got a lot of steam.'"

"Both of us made a fantastic run that session," Coughlin said. "I think it was the fastest two runs of the whole race. But we'll just have to dig a little harder, from a driving standpoint and everything and try to get her to go.

"Rickie's doing a good job. He's leading the points and picked up a couple more rounds. It’s not near over, but it was his day today."

Coughlin, though, knows he had a pretty good day, too, as he shaved two-tenths of a second off his first pass of the weekend.

"As a team, we did a good job," said Coughlin, the 2012 Pro Mod champion. "We added some points. From Friday to Monday, we made a big improvement."