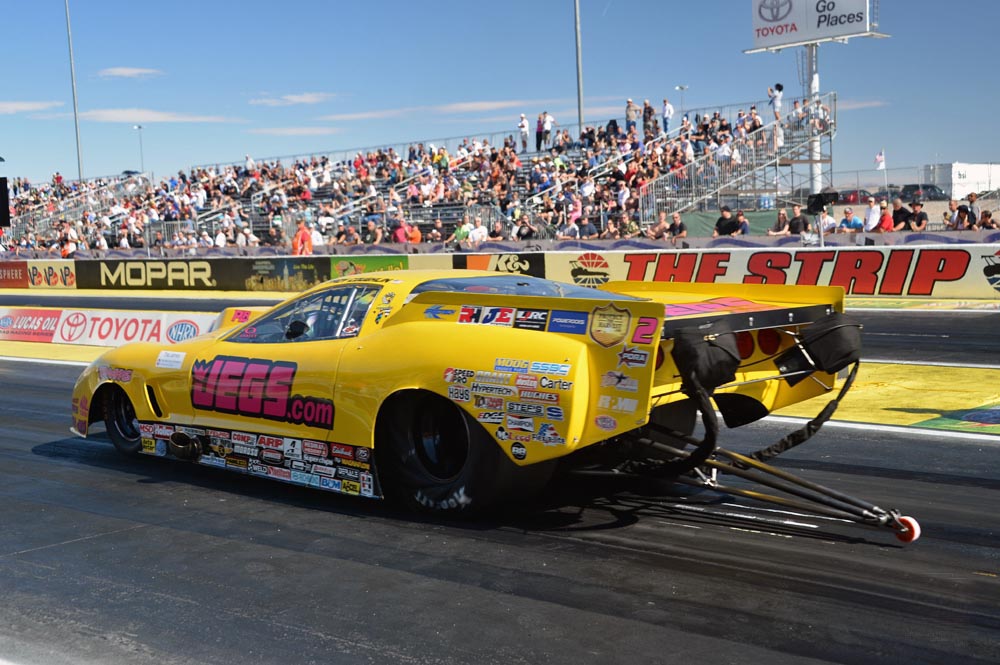 LAS VEGAS (Nov. 2) — For the second straight year, drag racer Troy Coughlin has finished the NHRA Pro Mod Drag Racing Series as runner-up to "Tricky Rickie" Smith. Coughlin won the 2012 title but has since come up short in the last two championship chases, both to his former crew chief Smith.

"My congratulations once again to Rickie and his team," Coughlin said. "They did a great job. We did all we could to track them down but couldn't quite do it. The second half of the year was awesome, but we gave Rickie too much of a head start with some of our early struggles, and in a 10-race series you just can't do that.

"Hey, this just motivates us all the more for next year. I'm incredibly proud of my team, our crew chief Steve Petty, and everyone back at JEGS headquarters in Delaware, Ohio. We all give it our best."

Coughlin had a chance to steal away this year's crown until Sunday's quarterfinal round when Smith beat Richard Snavely. That win by Smith mathematically eliminated Coughlin but ironically set up a semifinal race between the two men, which Smith went on to win with a 5.945 at 242.54 mph.

"I wish we could have gotten him earlier on the ladder because we could have held our own destiny in our hands at that point," Coughlin said. "But Rickie made a great run there and we had our worst of the meet, so I just took a minute to congratulate him."

The year was highlighted by two national event victories for the twin-turbocharged JEGS.com Corvette, the first in Coughlin's home state of Ohio (in Norwalk). He later won at zMax Dragway in Charlotte.

"Any time you win at this level it's a huge deal, and we were fortunate enough to win twice this year, so that was great," Coughlin said. "It really shows the depth of this team. You know, ultimately we had three off races, and that was the difference. If we had even won another round at any of those, it could have been a different ending for us.

"I'm really impressed with the guys because when we were way back in the points, back there where you can't even see the top spot, they never panicked. The drive and desire remained the same, and we just worked through the issues we were having. I'm so proud of this team."

With 2014 in the books, Coughlin is already thinking about next year.

"This category has grown so much and we've reached a point where all of the top Pro Mod cars in the country are here now," Coughlin said. "The fan support has been awesome, and the NHRA has given us a fair playing field over here, so we're all happy. I truly believe our best days are ahead of us."