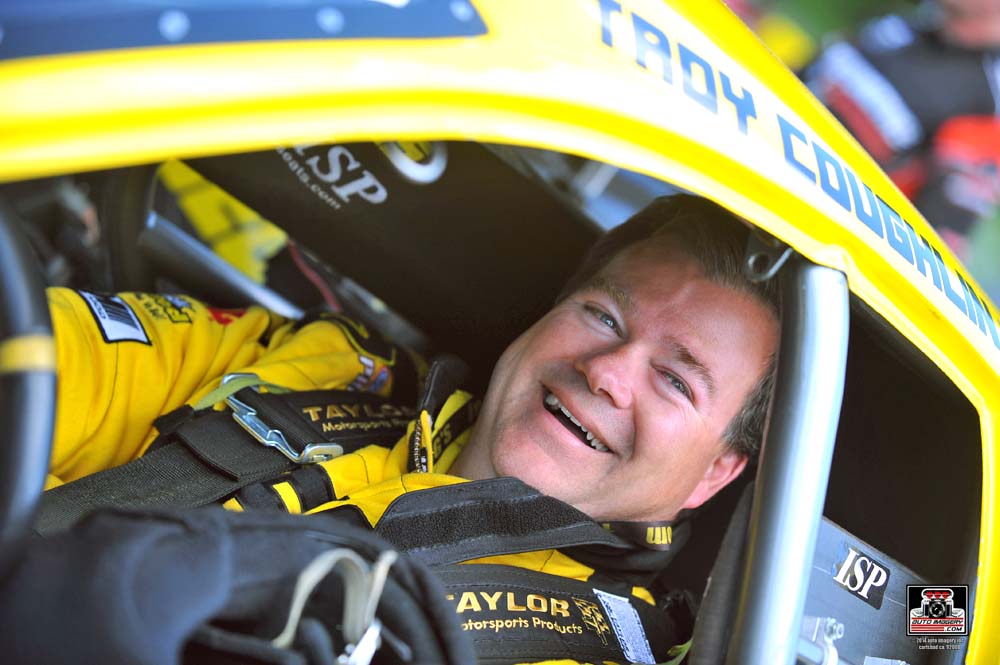 ATLANTA (May 17) – For JEGS.com Pro Mod driver Troy Coughlin, there is no such thing as a bittersweet victory.

So even though Coughlin's team has to change engines after he beat Mike Knowles in the first round of the Real Pro Mod Association NHRA Pro Mod race Saturday at Atlanta Dragway, Coughlin is all smiles.

"It's was definitely all sweet, for sure," Coughlin said. "Any time you win a round, man, that's huge."

As Coughlin crossed the finish line, smoke began to emerge from the JEGS.com Corvette, an indication Coughlin's team has more work to do.

"We hope the one under the bench is as good or better than the one in the frame rails," Coughlin said. "They dyno close to the same, and they both get down the track. All the stuff we've got has been run, so we'll put it in, throw a tuneup in it and roll."

The Pro Mod class has seen increased participation with the emergence of the Real Pro Mod Association, and the competition has stepped up accordingly. That's not a bad problem to have, especially with sponsorship backing for Pro Mod from Redhorse Performance, JE Pistons, Pro Line Racing, Larry Jeffers Race Cars, Powerocks and ProtectTheHarvest.com.

"As the series is getting tougher and tougher and cars are going faster and faster, you've got to keep leaning on things and try to make them as fast as they can," Coughlin said. "We're trying to compete against blower cars that are going 5.85 and trying to keep up with the nitrous cars that are going high-5.70s. This baby's got its tongue out. It's hauling ass, but it's got its tongue out. When that happens, you've got to work on them."

"I've got the best team in the world, that's for sure, between all the people at JEGS.com and the guys at Pro Line who build our engines and tune these things," Coughlin said. "I’m in a good spot."

Coughlin made improvement in qualifying from the first to the second qualifying session, as his best pass was 5.915 seconds at 243.55 mph in Q2. He had to abort his Q3 run, but the team readjusted for the first round of eliminations.

"The car took off and went left a little bit," Coughlin said. "It started to spin the tire, so I just aborted it. We went back and fixed it to make it go straight, and we picked up where we left off.

"Hats off to Steve and Bryan (Metzenhiem) and all the guys. They've taken this thing and gotten it tuned up and going fast and going straight. We're moving in the right direction."